these messages are from my oldest sister to my second oldest blood related human about getting her life together. (meth addict) 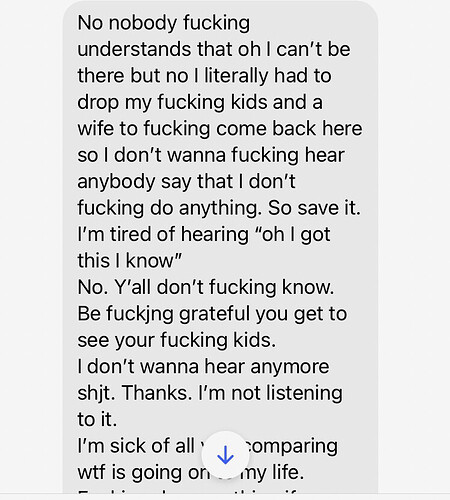 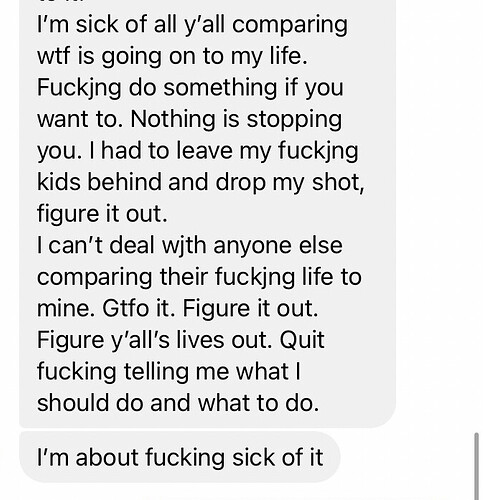 it’s so funny because she doesn’t even realize that it’s HER FAULT!! she chose drugs over her own kids and acts like everyone should pity her and feel bad. she lies to her friends about doing meth and the reasons she can’t see her kids anymore. (lost visitation rights) we told one of her friends about the meth but she just went right to the other one none of us have contact with. she’s a hypocritical piece of shit. if she doesn’t think she’s done anything wrong then why didn’t she tell her friends about the meth?? why didn’t she give them the whole story?? why not tell them if you’re so deserving of empathy?? fuckin bitch. i yelled at her about cleaning the bathroom and bedroom that she absolutely trashed because i’ve seen more bugs in the past two days than i have in months and she had the nerve to tell me to stop being a little bitch?? i told her not to move into somebody else’s home just to trash it and she said she should just go back to nebraska and the only reason i didn’t immediately say she should is because my dad was getting frustrated. she needs mental help man. nobody fucking likes her. it’s bad when even your own parents don’t like you because of how much of a piece of shit you are to everyone in your life and then don’t even own up to it. i don’t even know if any of us will ever be able to see my nephew and niece again because of her. the foster family knows my mom well and talks to her when they can but i think they’re cutting her off too. they’re adopting both my niece and nephew so we wouldn’t have any say in it. he’s my first nephew and i haven’t even seen him since maybe 2018? three fuckin years cause of this stupid meth addicted bitch of a blood related human who fucked up so many peoples lives out of her own selfishness. so tired of it.

You can hate her, you have every right to and you can also understand that she has an addiction problem and its probably in a lot of pain. Her life is filled with turmoil. You have your own limits and you shouldn’t have to put up with BS, so make sure you take care of yourself. She needs help no matter how much you “hate” her. My first instinct is to tell you to just grab her and hug her tight because I know what it’s like to be an addict and how much love from your family makes a difference.

Take care of yourself and I hope that your sister can find help.

refer to i think my previous post regarding her. you’ll see why nobody pities her anymore

everyone loved her enough. she was spoiled her ENTIRE life. she ruined it on her own by constantly asking for more and more and more until nothing was enough. she always took and never gave. begged for money for “food” when she would never provide proof it was for food or anything. she took money we gave her for her kids lunch so she could spend a day with them and spent it on meth. now she complains about losing her kids. she could’ve gotten up after the first obstacle and at least TRIED to get her life together by moving back here but instead she fucked some guy and had a kid w him less than a month into the relationship after we all even said he wasn’t a good guy. we warned her numerous times and told her to come home before everything even started and she was still a selfish bitch. please don’t tell me to hug her or anything as such. we’ve offered her rehab and such, she declines. she calls us names and tells us to fuck off out of her life.

I’m so sorry you’ve had to deal with that crap. hugs