Finally realizing one of my traumas

I was born into an abusive family. My father is a drug addict. My mother is a clinical narcissist with her own personal history of unresolved child abuse. She has constantly denied my reality from infancy. Our family wasn’t any different from anyone else’s. This self hatred was just me being over dramatic. I just needed to smile more. Be grateful that I didn’t have the childhood either of them had. That’s it. I was ashamed for voicing my ungratefulness when clearly I was way better off than most. What was wrong with me? Why am I so greedy?

I am the youngest of three.

My sister is 4 years older. She is, always has been, and always will be my heart and soul. I am still here because of everything she sacrificed to keep me safe.

My brother is 6 years older. I don’t want to imagine the parts of his story I haven’t seen.

I had been molested, raped, and sexually/emotionally abused by various people by the time I was 16. All of it blatantly obvious, all of it hidden or ignored. I am currently processing each event individually as my flashbacks come. So far, they have all been memories from around 2005-2009.

I am now 29. On 7/30/20 I decided to finally tell my sister that I was sexually abused by, who I thought was, her boyfriend.

Contrary to what he made me believe, he and my sister never dated. He only “reached” for her to keep her close enough to support him financially, live in our home, use her car… She was so determined to help and support him getting sober after so many failed attempts with our father. Even more so when he gave her his tainted version of the love and affection we were always searching for.

He gained her trust to confide all of her deepest weaknesses and sorrows, then used them against her to maintain control of her emotions. He depleted her soul of everything, just to pretend to save her from the agony he curated.

He would constantly torment her with the idea that I was sleeping with him. He enjoyed watching the adrenaline shoot through her as she struggled to land on any emotion other than instinctive blinding rage. Then he’d shame her for even considering that he, OF ALL PEOPLE, would risk 25 years to life in prison just to sleep with a 16 year old being raised in a crack house.

He made it CLEAR that I was to keep everything a secret. He was risking his life and reputation to be with me, and if we got caught, I would never see him again. I would die in that house, and it would be my fault for not keeping my promise to him. We just had to wait until I was 18 to finally start our life together. What was another 2 years?

Eventually he moved back in with his mother after many overdoses and a grand-finale-altercation between him and my parents; I believe this was over stolen cocaine. That was our main income, after all. Of course, my parents were furious.

I was at my friend’s house experimenting with marijuana for the first time. This will fix me. It has to.
We spent the evening uncomfortably staring at the Blare Witch Project before my text alert went off.

“I just knocked your dad out. Can you come pick me up at the corner and take me to my mom’s? Love u sooooo much. Smile… Mwah!!”

He would occasionally text me to meet him at his mom’s house after school. My dad was usually still passed out in the driveway crashing from his cocaine/Klonopin cocktail that he required before taking me to school every morning. Needless to say… I didn’t have a ride home anyway.

His mom conveniently lived right across the street from my high school with her two younger sons, 11 and 20. The older of the two is/was in and out of prison, also struggling viciously with drugs/overdose and lived with us briefly during this time “to get sober”. The youngest… I can only hope he learned from his brothers’ mistakes.

It wasn’t strange to his mother for a 16 year old girl to be hanging around her 23 year old son. He and my brother had been best friends their whole lives. She was grateful we took him in when he was struggling too heavily for her. I was just another part of the family.

He told her. Every time.

“Hey boo bear, your sister just showed up at my house again today. I guess it was a really bad day and she’s afraid to go home. She’s sleeping now. Love you sooooo much! Mwah!!”

“Why is my little sister at your house? Why is she sleeping?”

Of course she called me immediately, frantically asking me where I was. I did as he told me to and said I was still at school, or at my best friend’s house just 2 streets down.

He trained her well. She knew how understanding and compassionate he was, combined with all the things she’s had to protect me from, and knowing how badly I needed a trusted “family-figure” to confide in when she wasn’t immediately available. He was helping her take care of me. She couldn’t possibly be… why would he joke about it if it was true? It’s not true. She wouldn’t do that. He wouldn’t do that. She’s safe.

He always had a finger on my pulse, even after I stopped communicating with him about 7 years ago. I’ve kept this a secret my entire life, as I was told to. He found me this year. He’s 36, has his own kids, a wife, says he found god, has been sober 4 years… and says he still has those indecent photos of me when I was 16.

How can I keep this to myself?

I don’t even know where to begin.

Wow @0liveJuice what an INCREDIBLE story. What a sense of relief coupled with more questions you must feel right now. How many facets of your life have been effected by these interactions and this period of your life?

I am incredibly inspired by your ability to look back and identify meaningful and impactful points in your life, and process how they effect you now.

I really look forward to hearing how you are doing now, and getting an update! You are incredible, thank you so much for coming here to share your journey of growth and learning about your trauma 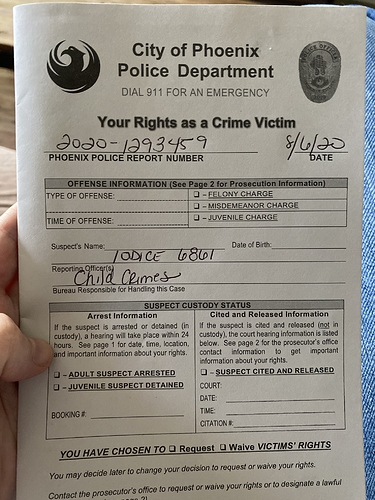 That took so much courage! That picture is giving me chills! Good for you! I don’t know who you are, but I’m proud of you for standing up for yourself, acknowledging that what you’ve been through isn’t okay, and making a bold move to find resolution!

Stay strong. What’s coming next won’t be easy, but they need to answer for what they did to you and your siblings. You don’t need to be afraid of them anymore. I hope your sister will support you as you take this step. In the meantime, we’re always here.

Thank you for trusting us with your experiences. You have been through so much, and I want to say again how courageous it is for you to look back and unearth these atrocities, tell others about them, and begin to move forward in your healing. (And a note on that - I don’t mean only “moving on” or “coming to terms” for just yourself - I mean justice for you and your family as well. The police report is such an important first step as light begins to overtake darkness).

I urge you to continue to unearth the things that have happened to you - which I actually wince at asking because I anticipate how painful that will be - so that you can know what it means to confront fear and grow strong, can overcome and become more than your experiences, and bring the appropriate people to the justice they deserve.

Our community is here to help you fight. While your battle is ultimately your own, we are able to send reinforcements and backup through encouragement, support, affirmations, care, listening, speaking-into the situation, love and hope. You won’t have to fight alone, and you will know - as you’re fighting - that there are dozens and dozens of people behind you.

We are with you. Now, and tomorrow.

@0liveJuice Words are not enough to express how it feels to read your story and see this photo. What a huge and powerful step towards restoration. For a peace you deserve and own rightfully.

Thank you for sharing. You are truly inspiring.

I hope with all my heart that justice will happen. And in any case, as our friends said here before: we’re rooting for you. Standing by your side.