How would you handle this?

Hey guys. I feel awful, about how i handled this situation, but I’m just wondering how other people would have handled this?

At the end of last week, the UK had what is supposed to be the hottest day of the year, and honestly, the heat here is just unmanageable due to the fact that the humidity is always 80% or higher when any type of heat hits. Anyway, that day I met this homeless woman in town, about my age, 26/27 and she was quite heavily pregnant. She asked me if I could get her a cold drink, and so I did that, and sat and chatted with her for a while. Now, that in itself was a decent day because I fund another possible support group in person from stopping with her - however, things have been bad since then. So that day, I gave her enough money for a hotel until she was able to move into the flat the council was prepping for her, and a little extra to get food. Looking at her phone, this girl didn’t really have any friends, so I gave her my number just so she had someone to talk too. Later that day she phoned asking for another £20 because the hotel fucked her over (I gave it to her because I know what places are like here in my home town). I text her the next morning asking her how she was etc and I got no reply. 2 days later she phoned me asking me for more money because apparently her mum had died and she needed to travel cross country - I said no because I’m struggling financially myself. She huffed and hung up the phone. A couple more days went past, and she text me again… It’s easier for me to show you how she tried to guilt trip me than it is to try and explain it. 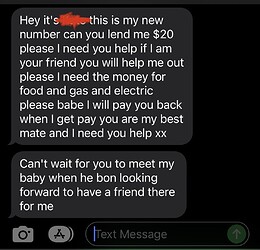 This was the second occasion I had told her no - I don’t have enough.
Today she phones me to say that she had given birth to the baby and that she was going to need some money to get home when they discharge her and food etc. So, being the idiot I am, I believed her and gave her the money.
Apparently that wasn’t enough for her because she phoned me a 3rd time half an hour later, pretended to ask me what I was doing how I was etc, and cut me off halfway through to say she needed more money.
TRIGGER WARNING FOR SH. I told her no, I had already given her more than I could spare, and she proceeded to try and emotionally blackmail me by saying “I’m sat on the floor in the bathroom with a blade self harming because im so stressed and I don’t know what to do” TRIGGER WARNING END
She told me that her mum and her landlord couldn’t help her, but I stuck by what I said originally, which was no. She hung up…
After that, I realised I had caught her out in a lie because just the other day she said her mum had died? This had me thinking… When I met her last week, she said she was 7 months pregnant. If she had given birth that early, he would not weigh what she said he would weigh, and they would be held of observations and especially not discharged the same night. After this came to light, I blocked both of her numbers so she can no longer contact me because I do not have the mental strength right now to deal with emotional blackmail, constant requests for money and persistent lying… I feel like such an idiot for even giving her the money I’ve given her in the first place, but also feel awful blocking her.

If you managed to stick around and read this whole thing, thank you, i know its a long one, but if you did get here, how would you have handled it? Would you have given her the benefit of the doubt at the start too or would you have been more clued into what was going on?

I think the second I saw, “If I am your friend you will help me out” I would have blocked her number and been done with it.

She may be pregnant (that can be faked too) and in need of help, but that’s not the way to get it. I’m not sure how it is in there, but there are ways for a pregnant woman to get help with food and shelter here. I’m guessing it’s the same there too.

I respect you for trying to help tho even tho you yourself are having financial problems. That says a lot about how much you care.

Hello Kayla
Oh boy not gonna lie I think by blocking her you dogged a bullet. This had hit way too close to home for me. I had been manipulated and emotionally blackmailed before to give people money and since then I much more careful. When someone asks me for money and I say no (right now I don’t mean like spare change but like a lunch’s worth of money and more) I am always careful. No means no. It’s your money and you have earned it, you dont owe it to anyone. A true friend will never do this. It’s just not fair.

You did right by blocking that person. I only wished you had blocked them sooner so this scumbag of a person didn’t have your money. They truly are a scummy person because the didn’t care about your situation or your well being, only about themselves and how to get more money from you. Lies and excuses and manipulation, that’s what this sort of person does. I had burned myself more then enough with these people and you had your experience now. Beware of these people. They might seem like victims but they are predators, like wolfs in sheeps clothing. If you didn’t stop they would just keep asking until they would suck you dry of your finances.

Advice for the future. Try to spot the red flags. Asking for money is one. Second is that they do it repeatedly and usually similar sums or higher sums. Third is the manipulation. Fourth is the disregard for you and your financial situation. Fifth is all the bullshit (the accidents, lies, strange random reasons for more money and excuses). Sixth is the fact that when they don’t get the money the become more pushy about it until they get it or you block them.

I hope you will never have to deal with this type of parasite ever again. They really are bad calculating people and what seems genuine about the is usually just manipulation. You did good Kayla. I am glad you blocked them. It’s a hard lesson to learn but now you know it and you will be careful next time. Take care for now and try to relax and rest. Don’t let this ruin your days, those people aren’t worth it.

The height of generosity and kindness is giving when things are tight with you as well.

Your first instinct to help is amazing, but it sounds like it quickly became more of a scam. If you’ve ever caught any of Kitboga’s stream, you’ll see how the progression of desperation goes as they try to guilt trip you, threaten to hurt themselves etc

I’m sorrynyou got caught up in that, and I hope your finances are still okay. Blocking her was the right thing to do, because persons trying to take advantage of you, and lying to you too about her mom dying, never just stop and leave you alone.

I would have blocked her too, maybe forward her the number for assistance and aid available to her to make the point that there are options for her.

You have done what you could, @Kayla. Actually, you’ve given a lot of yourself because you have a big heart. What happened is not your fault and your decisions were right - both trying to help her and blocking her. You have followed your values and acted in a way that is fair, until it was time to be fair to yourself too. This shift must have been so brutal for you, but it was the right call given the nature of your conversations.

If this woman is homeless and in a difficult situation, she is likely to do things she doesn’t necessarily want to do. She is in a situation that brings despair, and despair can make someone do awful things such as to put themselves first in any situation and manipulate, including at the expense of others.

Understanding this is one thing, and that doesn’t mean you would have to carry that burden. It is objectively heavy and requires resources that only more professional services could bring. There are appropriate types of help depending on the situations that people are facing - and you becoming her money distributor is not going to help her. You have made a fair decision and I imagine that it was difficult to do so, especially when your willingness to help others is conflicted. I hope you can be at peace in times to come with the fact that you’ve done what you could, but that her needs at the moment are beyond what could be offered, both financially and emotionally.

It’s not your fault. You were not an idiot for trying to help her. You were not unfair for blocking her either. It’s okay to protect yourself.

Hi Kayla.
I think I might have been a bit too harsh on the person in my initial reply. You did the right thing to help. I know I was very judgemental of the person, that’s because people similar to her have caused me a lot of hardship in the past and I had to put up big boundaries. You are right for trying to help but some people are just using you and you must not yourself be used.

@Ashwell @Sita @Micro @Mystrose
Thank you guys for your replies.
I decided that I should message her with an explanation of why I stopped contact. I have unblocked her waiting for her reply as I felt it was unfair of me to send a text like this without letting her respond. But once she has, I will block her again for good.
This was what I said, I don’t think it was too harsh. (The pictures added the wrong way round. I’m too lazy to change. Read the second image first)

well done,
Please prepare yourself for more emotional blackmailing but hopefully she will read and be moved to be more truthful.

This was an incredibly kind message, friend, more than most people might be willing to do, and that shows your heart!

Well done, keep being your awesome self Kayla!

She didn’t reply.
I have her the whole day - but nothing. So that’s that I guess.

Let’s see, I guess I would’ve handled it about the same way you did. I too tend to give people the benefit of the doubt and sometimes it ends up biting me in the you know what. But It seems like you handled it the best you could and I commend you for that. You stood your ground, gave when you could and sympathized with her even though she kept lying and was trying to manipulate you. You did the right thing cutting her off.

You’ve handled this so very well, @Kayla. Being honest and respectful just as you did, also providing some explanation so they can also find closure, was very kind and thoughtful of you. I hope you are now at peace with this decision. You have done more than most people would have.