I am confused today. tw 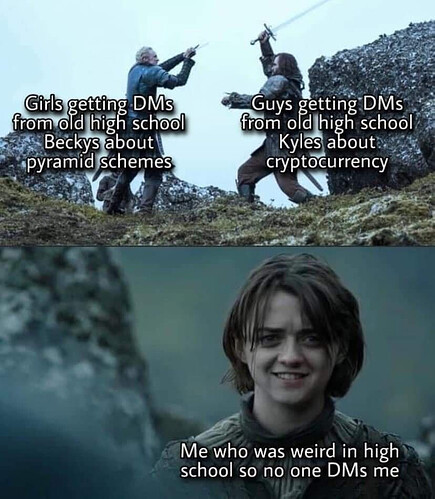 and now someone from college is messaging me. originally it seemed they wanted to hang out because they moved to where my school is, but i am doing it online, so… I told them that and they’re asking me questions about it and I am just kind of like… why ? we weren’t close and talked on a few occasions, but they eventually showed interest and were wanting to go out with me but I turned them down since I saw them only as a friend.
so i am confused. why are they messaging me out of the blue? I guess maybe they did just like me and want to be friends, but it feels so random, you know?

TW: Self harm
yesterday i relapsed and have been trying to be gentle with myself. I said something in a fanfic writing discord network - which was more or less that I’ve noticed fanfic nowadays tend to be of lesser quality and don’t have spell check. are people seriously writing these on notes app or directly in tumblr? pretty much everything has spell check nowadays… and someone got super mad at me because I was being rude and could have hurt people’s feelings. They were basically just an asshole and got overly hurt. I wasn’t saying anyone in specific or anyone in the net either, it was just an observation. I wanted to understand why people felt comfortable putting out such shitty works.
They were really rude too, because I mentioned how I don’t think this is because I have my degree and experience, and called me an ‘experienced writer’ that should offer beta services (which 1. makes it sound like a chore and 2. I do offer to beta read…) I never claimed to be a great writer, I was just saying that maybe I noticed it more because of my degree?
This person even @ me and demanded I apologize, then immediately @ the admins to delete everything. And I did, I said I wasn’t trying to start anything and I just wanted to converse on it, and blah blah blah but they kept being like “apologize” and it was just. terrible.
Then the admin was like, you could have put this in the vent channel instead and deleted almost everything, except for this person when the @ the mods and then proceeded to thank them for deleting everything. (So i messaged my mod friend and was like, “why didn’t they delete what they said?” to which she told me the other mod was at work and probably forgot, then deleted what that person said)

I feel like I always unintentionally cause drama like this. I didn’t think it was thoughtless or inappropriate, especially because I wasn’t calling anyone out. I was being very harsh, and I totally recognize that. But at the same time, I genuinely cannot understand why people feel comfortable putting out such poorly written works, and then why readers love those so much. It really hurts me because I put a lot of time and effort into my writing, and I’d like to think the quality is ok. I know I don’t post as much, but at least I don’t post terrible grammatically incorrect writing and say “sorry this is unedited < 3”. and no, this isn’t even about people whose first language isn’t english. their writing often is better than this unedited crap TT

as you can tell it makes me mad

and i ended up cutting again because I just couldn’t control the urge and didn’t have anything easy to do.

I’m also stressed with hw and assignments. It turns out I forgot to turn something in last week, but my teacher is giving me until Thursday to submit it with no penalty. I have a different assignment due tonight, and many due friday. except I work wednesday and thursday, even though I thought I took off thursday -_-

Hi sakurasangel.
That is a nice meme

. I dont know why that person messaged you but ( and this is just a guess ) I think they like you in some way. Maybe they think you feel lonely or ignored so they wanted to catch up.

This situation is complicated… On one hand yes I understand your frustration with the quality of the things you read and that person should not have made a scene because once you put something for others to see there will be criticism. However I also understand the other side. I used to like writing and even tho something you write is not very good it still takes effort. Then you put it somewhere for others to see without making them pay so it is free. You just want to be seen. I know that good criticism is good but calling someones work shitty can really hurt on a deep level, because of the time and effort they have put in the writing. They should hear the truth about their work but not in a hurtful way i think.

I am also sorry this had caused you to self harm. Try to find alternatives like the red ink pen. It might help. I know you are under a lot of stress but you can pull through this. I wish you the best of luck.

to be fair, i never used the words shitty I just said bad quality and unedited lol… almost the same thing though

Yeah, I need a new red pen. I don’t really keep to many pens around, and I seem to lack red. Mostly because I use ~nice~ fancy pants pens and don’t use ballpoints lol

maybe the meme was so funny, that is showed them a side of you that they thought was super cool/funny.

Writing is a deeply personal thing. There are sooo many out there who never post or submit pieces because they’re stuck in editing hell, revising and revising and can’t get it perfect. Others just post and share and let ppl see the more raw deal. There is literally no write or wrong (hehe joke spelling lol)

As a writer, you are aware that words are important. Sure, you asked a legitimate question, but online, tone and how we phrase things matter so much.
It’s easy to come across as mean or meanspirited.

I’ve found an easy way to avoid this is simply saying “no sass meant, but i was wondering…”
This way it makes it easier for everyone to know where i’m coming from.

Hope this can help u a bit.

Hope you are being gentle with yourself.

Hi friend, thank you for your post, I will just say first of all that I have no knowledge of fanfic so I do not know who or what people write on there but from your post I would guess that writing is clearly something that you are passionate about and thats wonderful, we all need to love something however not everyone is quite so passionate and just sees these things as a bit of fun and doesnt take it that seriously and may take the critisism not so favorably as others however you meant it and its now got out of hand. That is a shame because its clear that you never meant to upset anyone. Of course the other problem is when words are written and not spoken they can be taken in any manner and you cannot hear intent so again you have to be a bit more careful. I would also like to mention your work load, it seems you have an awful lot on your plate to deal with, if its too much talk to your tutor, they sound like they are open to conversation and understanding, see if you can break your work load down a bit. Explain the them that things are getting on top of you and you need a little help. Its never a bad thing to ask for help. We are always here for you. Much Love Lisa x

it’s been a couple weeks since we last connected and i’m thankful for this opportunity to support you again :’) for the college friend messaging you thing, i feel like it’d definitely be random regardless how they reached out. if you don’t feel comfortable with hanging with them or even conversing, you don’t have to force yourself to do something you don’t want to. i think it’d be cool though if you are okay with trying one hang with a new friend to do so with them to see if the friendship clicks!

as for the fanfic issue, i’m so sorry that conversation went that way on discord. fanfics are really cool in the way that most people use them as positive escapes from reality, hobbies, and fun ways to connect with friends with mutual interests. i’ve only written one fanfic in my life and that was when i was 10 and lemme tell you, i would have been the person that you’re not a fan of hahah! it’s probably safe to assume that the other writers not using spell check are young and would appreciate constructive feedback on how to improve their writing, especially from an experienced and knowledgable writer like you! heck, my 10-year-old self would have been so excited to hear how to grow my own writing, maybe that would have even motivated me to continue in that hobby.

your heart is in the right place where you want to see your fanfic community be better and you are the person to help them get there (whether with a reply of helpful feedback or beta reading offers like you said). but you are not alone in feeling upset about putting your all into your work for it all to be pushed to the side for something made with less effort, becoming more popular. i’ve come to the realization that while i might never get as many viewers/subscribers as another content creator, i still create things to make my friends smile and to learn new editing techniques! it’s all in a change of perspective because there’s no way for us to change the interests of the masses.

i am sending you love and comforting wishes, my friend. i hope that the next time you’re looking to self harm that you remember that i believe in you to turn your destruction into creation… so instead of cutting, write your heart out in vent fics, go running and run as fast as you can, do whatever you need to do to protect the body that creates written works of art. i value you and know that if anyone can do this, it’s you.

I think most of the writers I mean are all like, early 20’s?

but dw I was totally a trash writer at 10. I have stuff I wrote when I was like, 9 and am keeping it because i’ve had the idea for a novel since then lol