I get so lonely i depersonalize, why?

im so detatched sometimes and it draws people away from me, to the point of where when i go into a dissacociation-derealization episode. what normally happens is that i get so much anxiety around people because what do i do if i had said something wrong? am i too loud ? should i shut up? are these people annoyed with me? and that starts a cycle that has continued in my life for the last few years to the point where if i get close enough to someone i will completely distance myself because i think im too annoying to them. but this happened on friday and i just completely left the world around me like i wasnt even there to the point where my body went almost ragdollish like i just had my head lying on the table but i could feel everything, i felt my friend come over and run her hands in my hair to see if i was still there like not asleep and i didnt even move and i had multiple people ask if i was ok and i just sat there and stared at them or didnt budge and i didnt feel like talking at all i just didnt know what to do and then i connected again and i had a bunch of energy and was right back to normal and i still was un attached from emotions of ppl around me but thats almost normal for me at this point and i really kind of hate that i dont sense emotion anymore until someone tells me. it sucks but thats besides the point. i dont know what to do w this so here ig

Hi @ythultra This type of thing happens to me a lot. Almost every day. I would suggest you find therapy of course, but I can give you a couple coping techniques to bring yourself back in. There is the ABC game where you start with A and find something in the area that starts with A, then go thru the alphabet. Or the Color game where you pick a color and find as many things around you with that color. These will help ground you and bring yourself back in. You can also look up Mindfulness, which I use a lot. ~Mystrose

hey ythultra! thank you for sharing your experience with disassociation and derealization - you are not alone in these feelings and journey. i’m glad you had friends and others around you last friday to help you through it. have you spoken to a professional about your emotional detachment and moments of disassociation/derealization? my first reaction to reading your post was to ask if you’ve talked to a counselor or therapist since they are skilled with helpful techniques and ways of thinking to get you to bring out your emotions in a healthy fashion and to help you snap back to reality quicker. wishing you all my luck as you continue on in your journey, i believe in you! love, twix

Hello, ythultra! Thank you for sharing this with us. The main thing I took away from your story is that you worry that you annoy people but it sounds like your friend and the others around you were worried about you so they clearly care. Hold on to that knowledge. People care about you. And so do I

Hi Friend, Thank you for your post, I am so sorry that, that happened to you on Friday, that sounds quite scary but its lovely to know that you have your friend around you to take care of you when you needed it. It is a lot off of your mind to know that you have people looking out for you. I have found a short list of grounding techniques for you to look at, hope it helps a bit.
Please keep in touch. Much love Lisa. 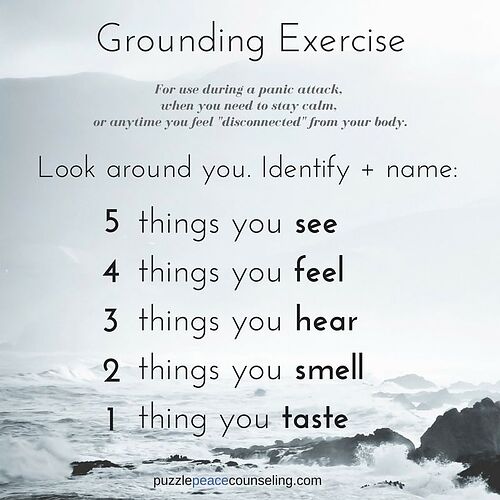 i have before, i have a personal therapist but i havent seen her in a while. shes told me it seems alot like a social anxiety type of thing but the dissacociation could tie in with my ADHD because sometimes if someone with ADHD gets overstim it can c ause dissacociation but not to the point of depersonalization. its something i need to further discuss but thank u!

It hard to be around people at, I get paranoid of annoying people too, and feel super anxious about it.

I think your therapist touched on it, especially since you mentioned anxiety as a precursor. I think it’s related to what used to be called withdrawing. I’m not sure if it’s the same experience you’ve had, but when stressed, I’ve had times when I feel like I’m shutting down, so exhausted I can’t even think. It could be overstimulation, or simply anxiety, which can be exacerbated by ADHD. I used to smile, thinking of fainting goats, when I felt that way. It really does have to do with DNA and our neurological wiring.

The problem can be overcome. Gradual desensitization and medication are among the approaches taken. Lisa’s grounding method can be super helpful. There is also something called “mindfulness,” which you can learn a lot about on Youtube.

The social anxiety you describe at the beginning of your post is very common, in fact, all but a few experience it at one time or another. A lot of people have figured out how to appear sociable and confident, even when they’re not feeling that way. In a sense they’re disassociating from their own insecurity, and feeling lonely because they haven’t been able to open their insecure selves up to anyone else.

If you spend a lot of time around the same group of people, I think it’s okay to tell them that sometimes you just need to close your eyes and breathe for a minute or two.

Verbal communication is a very imperfect function. In normal conversations, saying the “wrong thing,” or the right thing, but it’s interpreted the wrong way, happens many times. That’s why people need to make sure what they intend to express is received accurately. What I’m saying is that people mess up, then fix it many times in the course of a conversation. That’s why you so often hear, “that’s not what I meant…”

I think much of social anxiety involves feeling like being on “center stage,” or at risk of being there. You might as well take comfort in knowing that even if you manage a moment of being the center of attention, usually within seconds, the focus fades, and people quickly focus on other things or people.

I’ve always been a bit jealous of those who actually like and are comfortable being the center of attention, or those who can say what’s on their minds while being sufficiently indifferent to the opinions of others around them. For example, Betty White was one of those people. No one had any hope of embarrassing her.

I took a public speaking class, which helped a little. I think I’d be better off if I stayed in practice. I’m mentioning public speaking because if it’s cultivated, social anxiety is more easily managed. What is learned is exactly the skill needed to be comfortable in small groups.

There was an experiment (in fact, several) that involved basketball players, who were divided into three groups. The first group was told to go home and relax. The second was told to go home and think a lot about practicing. The third group was told to practice regularly. Naturally, the group that didn’t think about practicing, lost a significant amount of their ability. The amazing thing was, group 2 and group 3 were surprisingly close in their ability to play the game. I believe the same kind of thing can happen, at least to some extent, for an introvert who puts some thought into public speaking, even if they never attempt formal learning about it.

Introverts who speak, evoke focus, and empathy from the listeners, hence the common belief that they are the best at public speaking. Similarly, even in a small group, a socially anxious person who struggles a bit to communicate, is usually found to be quite endearing to those listening. If you say the wrong thing, you can fix it. It’s far more likely you’ll say the right things. Among the “what if’s” that cross your mind, add, “what if I say the right thing, and it’s appreciated?”