I hate myself more than anything

I hate myself. And I can’t believe how stupid and naive I really am. I tried to move on from my cheating ex boyfriend and found a guy who seemed really sweet… problem is…he’s very possessive and controlling…he doesn’t want me to hang around people on overwatch or hang out with people without him, even though me and him weren’t dating. He has even said he loved me within the first few days. I did like him a lot too…and I thought I could move on…so I did give him nudes like he wanted. As a few days went by, he started to pick fights with me more and more, saying I don’t care about him and got angry I said I did have 1 ex boyfriend who is my friend. My feelings for him started to go away as this continued…it got so bad that he threatened to block me and next threatened to kill himself because I didn’t want to date him. I told him I’d do anything so he wouldn’t kill himself… that I would date him so he wouldn’t do this to himself. The next day, he sends me a message to look on discord…he said he needed one final request of me because he’s starting to move on without me (he said this). I asked him what, and he said he needed help “getting off” (masturbating) and wanted me to send nudes of myself before he left. I refused and he said “wow I didn’t know you were a liar, you said you’d do anything for me”. I didn’t mean for me to send nudes so he wouldn’t kill himself… he even sent me a nude of himself to me without my permission…he was blackmailing me. I told him I was done, and I removed and blocked him off everything. I’m such an idiot. I can’t believe I fell for this again. Now I’m crying my eyes out wanting to cut and contemplating suicide so I won’t get wrapped up in more crap again…I just want all the pain to go away. I want to be dead. 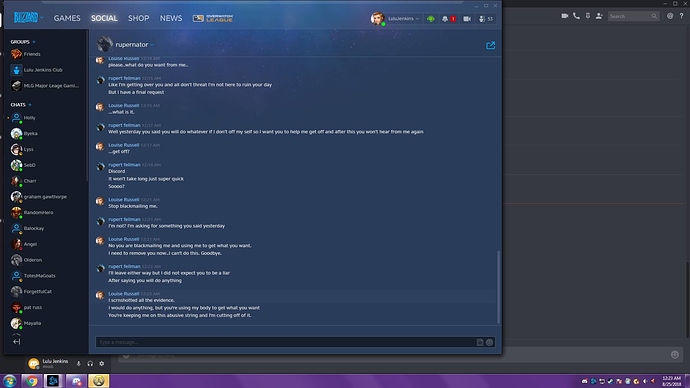 @Purplelilly you’ve done th right thing by removing and blocking him. Sadly, these threats aren’t uncommon anymore, and a lot of people recieve them when they break up with someone. You’re not an idiot, you’re not stupid. If he tries to reach out again, try to keep blocking him. You don’t need to fight this back. It’s okay to continue keeping away. Sorry I can’t be of more help, but I wanted you to know you’re not alone and you’re not stupid for feeling this way over what’s happened.

I love you so so much.

You are so so amazing.

You are so so important.