I really got message today that really pissed me off. One guy did not want to do music cause my post on socail media. We both liberal view, but his get extremely cause I’m not woke enough for him. He also made a comment about my mental health. Well mainly it was a comment about my mental health. I know post mess up stuff while I’m anger, I know say wrong stuff , but who fuck is he to make a comment like that.

I just wanna punch him in the face and I can’t control my anger anymore. I feel so no one will ever understand me and I can never get better about my mental health. I just so anger inside, that I can’t control, I just never interact with human in general. Honestly, I kinda hate everyone, I hate both the left and right politics, I hate mess up governments and hate judgements people in general.

Again, I know I’m not a good person, but at least I’m honest. I don’t pretend to be this self righteous person that while ways right. I just be alone forever.

You don’t believe you are a good person, but get angry with others for not being good? You don’t like to be judged, but judge others as deserving of hate? Your friend judges you for not being woke enough, and you judge him to be an asshole. Yes, he’s an asshole because of his judgment of you, but because of his ignorance, his judgment is baseless, therefore not to be taken seriously.

It sounds like his comment about your mental health, triggered feelings that challenge your mental health. Just like weightlifting challenges your muscles to grow stronger, ignorant comments challenges your mind in the same way. Just as adding weight to the barbell helps to increase strength, it’s possible to increase emotional strength and stability by acknowledging the ignorance in those comments and resisting the temptation to let them hurt you.

You are a good person. Your anger is preventing you from understanding that.

I really love this image. It’s a picture of Michael Phelps as he’s about to win against a competitor who spent a week talking trash about how he was going to beat Phelps. 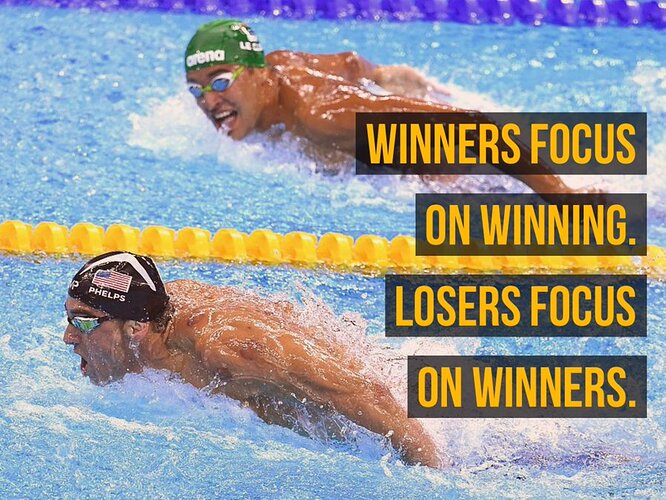 You and this other guy have similar views, but he doesn’t like that your views aren’t intense enough? That’s ridiculous. He could be focusing on bringing change to things he opposes, but instead he’s arguing with you because it’s easier to shit on someone who’s on his team than the opposition. It’s like any high school basketball movie where the star player yells at his team that they’re not good enough, because it’s easier to blame them than the other team.

So this guy is talking trash. He’s like the green cap guy, focusing on you instead of the two challenges in front of him. Imagine if Phelps looked back. He’d get distracted, lose his form, and maybe lose the race. If you keep your eyes on your own shit and stay in your lane, you’ll keep on doing good.

This guy isn’t your challenge, he’s just a shit talker. Life is your challenge. Life is hard. People and circumstances will try to stop you from living your best life, and you need to focus on them. A guy who thinks you aren’t woke enough is just the bully teammate trying to blame you for not doing enough while ignoring the opposition. He’d do well to stay in his lane and focus on his own challenges, but if he’s not going to, don’t let him drag you down with him.

Damn dude, sounds like you’re in a pretty frustrating situation. The fact that you thought to post on here shows that you give a shit and want to make a difference in this divided world. I hear you on the politics, they can divide people so fast over opinions and emotions. It seems like you recognize that and have some people in your life who are getting sucked into fighting over opinions instead of having a real conversation. That would be frustrating and toxic I am sure. Seems like you really do care deeply about honesty, integrity and making a stance for justice against people who come off as self righteous. That in itself shows you have a heart and see the world through it. Being angry when people hurt you is normal and when it comes to your mental health, the longer that anger lingers and turns into hate, the easier it is to get triggered. If people are using mental health against you and putting you down in the process, sounds like there should be some hard boundaries set with those people about talking about it. Obviously I don’t know the situation, you’ve come to the right place to let it out. What are some passions of yours that you can channel that frustration and anger into that’s healthy and will help you progress towards your goals?