i’ll get straight to the point; i’m struggling to not relapse. my mental health has been going downhill for a while now again, with my grandmas death day two days ago, seasonal depression kicking my ass and suicidal thoughts haunting me again.

i’m 11 months clean — 348 days to be specific. but i’m not so sure i can keep it up anymore. i’ve been feeling so unwell these past few days and my mom just yelled at me again for pretty much no reason and then proceeded to joke about it. she’s very well aware of how unfair she’s treating me but obviously does not care and it really sent me over the metaphorical edge. i’m so close to tears but even if i wanted to cry, i just can’t. i’ve never been able to cry much and this is as good as it’s gonna get anyway.

Hey there~Thanks for being straight with your struggle. It’s always OK to put it out here.

My heart is sad with yours in the loss of your Grandma. I’m guessing there is still a funeral service to attend. Even if there’s a celebration of life, there can be a deep loss as well. Were you close with her?

It’s that time of year, at least in the northern hemisphere, when nature is shutting down for a rest. It sounds like it affects you. This time of year it can feel like the world is closing in on you. I promise it’s not, Spring will come again! But I’m sorry you’re feeling the depression of it, and that it feels like life’s not worth living right now. You can always call 988 if you need to talk to a crisis counselor.

I’m so proud of you and your 348 days! I hope you can see what an accomplishment that is. It will always be yours. I hope you can find a healthy self-care distraction that will see you through the rough times you’re going through right now. I’m not sure if you are looking for ideas, but sometimes I listen to podcasts and color an adult coloring book. It can be soothing if you’re not too hard on yourself if you don’t stay in the lines…sounds like your mom is being hard on you right now. Is she grieving? Was it her Mom who passed on? It’s not an excuse for yelling at you but it may be an explanation.

So many questions I’ve asked! I dont mean to make you weary in the asking of them, and no need answer them if you don’t want…but I wouldn’t mind knowing how the next few days go~

thank you for your kind words!! i really appreciate them.

my grandmother actually passed away a while ago but it still affects me personally a lot, since i have a very complicated relationship with pretty much anyone in my family and she was one of the few people who never treated me with anything but love and kindness. granted i was a little kid when she was alive, but still.

and, my mom deals badly with stress. she always gets angry quickly when she’s stressed out and usually i’m the one receiving that anger. for no reason other than i just happen to be there. it’s always some trivial reasons too, that she blows up at me for — be it i don’t move out of her way fast enough, or come downstairs at the wrong time. and i’ve talked to her about it before but she doesn’t seem to see any issues with her behaviour, tells me i’m reading too much into it or that it’s just “something that happens”.
i talked about it in older posts but 2-3 years ago it was really bad at home. i used to get panic attacks and mental breakdowns over school, which stressed her out and caused her to yell at me all the time. it was a terrible cycle of me waking up feeling sick, because of my anxiety of school, which caused me to panic even more because i didn’t want my mom to yell at me. but she did anyway.

things are a lot more calmer now with me out of school, but i’ve gotten so much trauma from it that i’ll have to work through eventually.

i’ve talked to her about going to therapy too, but she thinks that she doesn’t need it. my dad and i disagree but we can’t exactly force her.

it’s just not all ideal, but at least i do not want to relapse anymore. i drew a bit and it helped me calm down tremendously.

once again thank you for your supportive words <3

tells me i’m reading too much into it or that it’s just “something that happens”.

Saying that it’s “just something that happens,” suggests, that she is aware that she sometimes loses control of her emotions. It sounds like she really does need therapy, and maybe medication as well, but denies that she has any need of it. So, you and your dad are dealing with someone who can’t control her emotional outbursts, but doesn’t see that as a problem. It may well not be a problem for her, because she is not at the receiving end of the blowups.

It’s very clear that her blowups are not the result of sound judgment or perception. Therefore, whatever horrible things she says to you are, in all probability the result of mental/emotional instability. It’s hard for a kid to accept being treated that way by a parent, without fearing there is some truth to whatever offensive thing the parent is saying. It’s even worse when a parent won’t admit to being wrong about treating their kid that way. Keep in mind, her bad behavior is 100% her issue, and is absolutely no reflection on you. It’s very common for parents to disrespect their children, while expecting respect in return. Parents who disrespect their children are deficient in parenting skills and blaming their children for it.

You might as well try to get along with her as best you can. Regardless of what she’s dealing with mentally, she must be convinced that she’s doing the best that she can. A very good practice that will serve you well, now and for the rest of your life, is to remain calm and genuinely respectful, even towards those who are acting like idiots or mentally unbalanced. I know it sounds like a tall order, but it’s doable.

Besides, your mom’s yelling is essentially made up of soundwaves. They cannot break your bones. They can’t change the truth of who you are, which is a decent and pleasant person. It may not feel like it, but you can consciously choose your reaction while she is yelling. You can keep your own thoughts calm. You can let her wear herself out with her venting. Then when she has calmed down, maybe the two of you can communicate thoughtfully. My mother was pretty crazy. She threw huge tantrums, and sometimes could keep them going for a couple of hours. She was very delusional, bipolar, schizophrenic, and I’m fairly certain she also had borderline personality disorder. However, as crazy as she was, after her tantrum ran its course, our communications could be surprisingly rational and calm. By the way, she went to her grave, never having admitted to any mental or emotional problems, and was convinced that she was never wrong about anything.

Regarding self-harm, you’ve made it 348 days. Congratulations! Can you make it just one more day? Stress in your life is triggering the urge. Odds are, you have dealt with other stressful triggers in the past year. How have you dealt with them? It may help to acknowledge the urge without being afraid of it. When we talk about fighting something or struggling with it, you are giving it undeserved power and influence. Instead, “turn away” from the urge, and choose a different way of dealing with the stress. You’ve already done that countless times, and have proven that the urge doesn’t have the power to control you.

You speak of having to work through trauma. That’s a good idea. Get help if you need it. It will make other challenges in your life easier to manage.

You might as well try to get along with her as best you can.

yeah, that’s what i’m trying to do! it’s really hard sometimes but i’m trying and, well, i think that’s enough.

Can you make it just one more day?

i really appreciate your reply, thank you! i’m trying to find a way to get back into therapy for myself, but it’s a bit difficult since i live in a pretty remote area and there’s only so many therapists we can afford. i’ve tried pretty much all that are covered by insurance already, but none were a good match for me for a lot of reasons. i’ve also tried to find someone online, which worked for a while but i could only see him once a month which just wasn’t nearly enough. sadly there’s very little open spots here at the moment in general. but i’m sure i will find something eventually.

First of all, congratulations on your streak so far! I’m really proud of how far you’ve come. I know as a dependant it gets hard to get help, and your parents are a huge factor of your mood. The only advice I can give is that you’re stronger than you know, just reading your post shows me how incredibly resilient you are. I know myself and the rest of the community is rooting for you.

Remember the plethora of people who care for you, and who you add value too. I would like to recommend journalling. It really helped me put things into perspective and have a grasp of what exactly it was I felt.

Once again, I’m super, super proud of you! You’re gonna do great

Checking in…How are you doing today?

I have also done journaling and find it helpful as
thestudent suggested.

and sure thing!! i’ll make a separate reply for the art :]

journaling does sound very nice! i do it sometimes but i might get more seriously into it, thank you both for the suggestion!!!

this is what i’m most proud of right now. it’s fanart of a game i adore called sally face 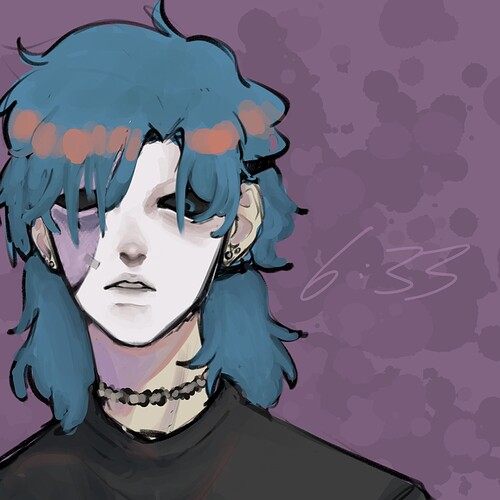 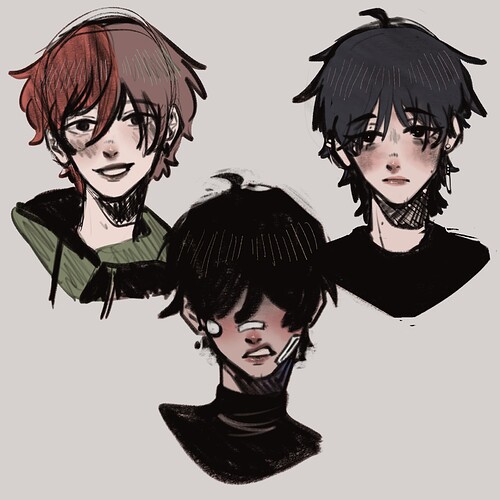 aaaand last but not least a rather quick drawing of my beloved oc iven, that belongs to a little animatic i made a while back 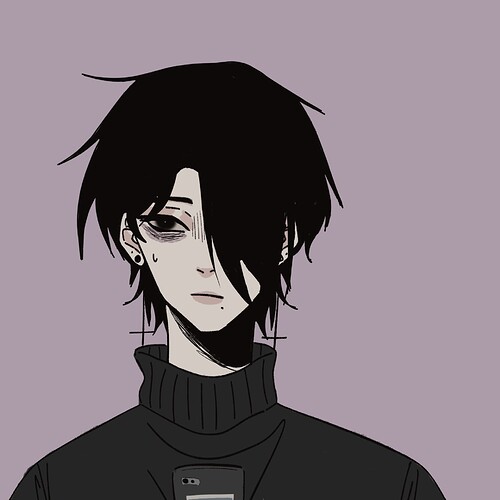 Thanks for taking the time to post them~
I appreciate seeing them!

Your art is absolutely amazing! Thank you so much for sharing this with us! Each character has its own personality that shines through them.