Throughout my life I’ve been called a failure, worthless, a waste, someone who shouldn’t be someone, and much more. I’ve been told that I’m nothing, a piece of trash, that I should just die. Everyday someone wishes death upon me, next time someone does it I just want to put a gun to my head and not think twice before I pull the trigger. More people have said they want me to than not to. It’s just getting to me, right? I just don’t want to listen to it anymore. I’ve tried ignoring them but it just doesn’t work. I want help and I need help but I don’t seek it. I’m trying and I’ve tried, but it just never helps. Or i’m not being right. I don’t think I’m right mentally, I enjoy the sight of my own blood.

Hey there friend, I understand the feeling of being called horrible names, I’m transgender but I generally get called rather distasteful things. But what I’m getting by is plenty of us here enjoy you here and you are so worth it, just because the people you met don’t like you doesn’t mean the world doesn’t like you, I’m sure you have someone who cares, maybe it was someone who haven’t seen in a while. My heart would break if you left this world, you are so much more stronger than you think. Please stay with us, if you want you can dm me and we can chat for a bit.

I would like to but I’m in school right now so I’d look really suspicious, I get out in a few hours though

Perfectly fine, I do have a meeting with someone in a few hours though so I might not respond so fast. But yeah I’m here for anything.

Okay, talk to you then

Hey if you would like I can message right now :]

Hey just wanna check up, has everything been okay?

I was taken out of school at the age of eight, and my parents were told by the school psychologist, that I was retarded and would not function beyond the level of the seven-year-old. I was also abused and sexually molested by two different people at the same time. In my child’s mind, I was convinced that I deserved all the bad treatment. Eventually, it was discovered that I was not retarded, and I was put back in school. However, I was so damaged emotionally, that I failed constantly.

I was raised by a bipolar schizophrenic, with borderline personality disorder, and a chronically depressed alcoholic. I was overweight, and was almost constantly ill with flues, colds, strep throat, ear infections and abscessed teeth. My parents were too self absorbed, to consider that I might need medical or mental health care. I was probably the least popular kid in school, and was forever being picked on, bullied and ridiculed.

When I was 10, I grabbed a butcher knife, and was headed to the cellar, to commit suicide. Fortunately, my brother caught me and talked me out of it.

My family face several evictions, and I attended 13 schools within 9 years, before I dropped out at age 15. The last conversation I had at school, was with the school counselor, who told me I would probably fail at anything I attempted, and end up in jail.

A couple of years later, I went to night school and finished high school, then started taking several classes, not in pursuit of a degree, but simply because I liked to learn. When I returned to school, I began getting excellent grades, often finishing semesters with a 4.0 average. Some years later, I graduated college with honors, and have had a generally decent life.

The point is, if I had listened and remained convinced of what I was told as a child and teenager, I would probably be just a liability to the welfare system.

The evidence is clear, those who told me all those terrible things, simply did not know me. I think you’re in a very similar situation, and you can leave all that negativity behind.

You are not the person they have accused you of being. The accusations are more likely to be based on their own insecurities and feelings of inadequacy. Feel free to be the person that deep down, you know that you are. Truly, those negative comments directed towards you have significance equal to a fart in a windstorm.

On a positive note, your experience enables you to understand the many others who have also been subjected to verbal abuse and humiliation, and are uniquely prepared to help them.

Kinda. My brother was talking about suicide a lot yesterday and my mom was having a mental breakdown due her dad’s death. But yea. Thanks to PM Seymour and the power of P O N K I’m kinda ok. Thanks for asking.

That’s good! :]
Just know there are people here for you!!

Well each day I feel more useless. In fact, I found out my mom does crystal meth. Nevermind I’m sad and now want to die… again.

Hey it’s alright! It must be painful to see someone close to you in such grief and going things that’s hurt. I’m presuming she is addicted?

Besides that I’m sure you have things to do. What’s a hobby you like to do?

That’s terrible to hear. My brother did meth for a time. I know the hell he put us through, I can’t imagine what it must be like to have a meth user in charge of your well-being.

Let’s make one thing perfectly clear though: your mom’s drug use DOES NOT make you useless. That is her life choice, and it is no reflection of you. It does not limit or dictate what you can contribute to the world or the people around you.

Hurtful words do sink in, as much as you try to keep them out or say they’re not true. You shouldn’t have to bear people telling you you’re worthless or a failure. They don’t know your potential. They’re lashing out because they hate themselves, or else they don’t understand you and won’t give you a chance. You don’t have to explain or apologize for your existence to anyone. You are here for you. Fuck what they think.

I understand the pain of feeling useless, like you don’t belong, that you’re a waste. I understand not wanting to seek help–getting help makes it real, and that’s scary. I understand preferring to hurt yourself over getting better. Those are all really hard things to deal with, but they are things that no one can stop you from dealing with. The ugly, hurtful words aren’t real. The people who say them probably don’t even see “you” when they say them, they’re probably just picking you because you’re there.

Your mental health and self esteem are low. The circumstances you’re in and the things you’re told would do that to anyone. You are struggling, and will continue to struggle after they’re gone, because they’ve hurt you; but the things they say to you don’t matter just because they’ve said them. What do they really know? Who are they to decide those things?

I’m not sure if she’s addicted. She was years back but I like playing video games, but they have been getting to me, doing the same thing over and over. I just can’t find a meaning. I’ve been getting into guns but it’s only fueling my suicidal thoughts. I know you trying to help but for some reason, it’s not working. I don’t know what to do anymore.

I understand, but hey, try to extend your hobby. What’s something you have seen was interesting but you weren’t sure if you should do it? Besides guns?

Not trying to remove you from your interest but you have to keep in mind to keep distance from things that make you have bad thoughts.

I haven’t see anything interesting besides guns. The ping of and M1 Garand is absolutely amazing. But recently my mom got a bolt-action .22 long rifle and an absolute SHIT TON of ammo.I am kind of a femboy in my spare time when I’m not playing games or shooting anything.

Oh haha! I’m a bit of a femboy too! You know if you are into make-up you can try makeup art!
You know stuff like this 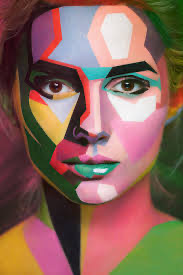 It’s really fun to do and experimenting with colors is really relaxing!

If you aren’t into makeup then maybe learn about color theory and painting, it’s really relaxing and meditating.

Woooaaaahhhh… That art look amazing. I think I might do that. Thank you, and may the thighs be with you,(One of my favorite sayings)

Haha thanks! I recommend you start small with make up art hold on lemme look up a video on basic makeup art