I'm upset about being upset because someone canceled up me, but I also completely understand, which makes me more upset

I hate this feeling.
I had an appointment with two people today to do something and both had to cancel, which is totally okay. They both had legitimate reasons to cancel last minute, but I hate the fact that my brain just swoops in and starts feeding into the painful memories of all the times that I’ve been stood up by others. It starts telling me these lies that people don’t like me, that they don’t want to waste their time with me.
Every time I’m going to hang out with someone there is this voice in my head telling me to not get my hopes up because people will not show up. They don’t want to waste their time with me and today that voice is louder because the people I was going to hang out with had to cancel. And I totally understand why, but it still hurts… because I’m suddenly that 20 something year old again who waited for her friends for over an hour only to hear a few days later that they forgot. And this didn’t happen just once…
Logically I know that this is different but there’s still that voice that is using this as an example of “see? people don’t want to hang out with you”, “See? this is the proof that people don’t want to waste their time on you”, “See? you really shouldn’t have your hopes up and you’re being difficult for wanting to hang out with people from different timezones.” And it’s fucking unfair. because it’s not fucking true, but at the same time I feel hurt… for nothing… for something that doesn’t even make sense… I’m so done with this feeling… and with the continuous wondering of "is this appointment that I made with person x, really going to happen, or is something else going to ruin the plans again, and am I just going to have to say again “I understand that life happens”?
Am I getting my hopes up too high? Should I just not expect people to keep to appointments and then maybe it will be reverse psychology that I’m happy that something does go on instead of people keeping on canceling on me? I just feel so stupid for even being upset about it because it’s completely logical… but also… I don’t know how to fight that old pain…
I’ve even tried to leave it up to someone else to say “Hi” first sometimes when we have an appointment, but that also resulted in a lot of “Oh I forgot we had an appointment”…
Sorry for my ramble… especially since it’s about something that should’ve already been fixed… or at least something I shouldn’t be upset about because I totally get it and I would’ve done the same in their situation… Sorry

out of curiosity, why did you end the post with a Sorry?

Old pains and this sort of negative thinking can set it really quick, can’t they? just swoops right in with the old Bart Simpson “ha ha!”.

Online times, timezones, all these things are hard to get going sometimes, esp at the end of the year like this. I’m glad you’re still trying even after being disappointed before.

Would having some sort of shared calender help, if it’s friends who you are used to planning to hang out with? Reminders can be useful, even if it’s phrased as “got everything needed, like snacks whatever, for out get together on date/time/place? need any help with that?”

Maybe i’m simplifying it, please let me know. I’m really sorry that this new disappointment brought back so many old painful memories. You totally are worth the time and effort, and there are lots of people who genuinely care about you.

Hoping you can find something fun and engaging to do otherwise, and make the most of the evening!

This is a huge part of my life. The fear of abandonment or rejection, perceived or real.

When I was a teenager, I had friends that would say they would be at my house in an hour and not show up for 3. Or just totally stand me up. I would wait and wait and wait. My head would make up very dark reason about why… from they were laying dead in a ditch to they hated me. I know exactly what you are feeling 100%.

It absolutely hurts and I’m sorry that you’re having these negative thoughts and emotions. It’s so confusing when you know and accept the reason why, but you just can’t shake the feeling that it’s really because of you. That you are the problem.

This is kind of complex and instead of me explaining what I’ve learned about this, I will put this video here. It’s geared for people with borderline personality disorder, but people can have this fear of abandonment and not have BPD. You might get something out of it. 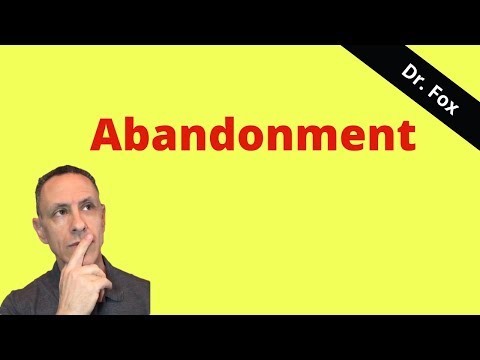 In this case it was really not possible to do a shared calendar thing because the reasons were very legit, but I have done it with some friends. With some it helped better than with others, but I still need to explain that even though I’m understanding that something needs to be canceled that it doesn’t mean that I’m not sometimes hurt by it.
When I’m meeting people and I’m not having a good day I will feel even worse for asking time of my friends or loved ones… I don’t feel like I deserve that time from them, so the small message up front is literally a step too far. Hell I have moments that I won’t speak up that we missed a meeting together because I just feel like I’m not worthy of that time anyways… and I know that that is not up to me once again… but I don’t want to have to deal with me, so why should someone else?
I’m trying to learn that though… that I shouldn’t make that decision for someone else, but when it comes to appointments, it’s almost like my brain wants that conformation of “you don’t really matter” because actions speak louder than words. Someone forgetting a meeting, says more than saying “hey, I miss you and I love you”… at least when it comes to my brain…because if you really cared you wouldn’t forget, you know?
And I know it’s not as simple as that either…

Sorry for making it so complicated and being so down…

thank you for sharing this video. I didn’t know it, but what he said about “core feelings” really struck a chord with me. Because I did recognize it as an old pain, but I just don’t know how to fix the automatic response to it yet… but thank you for the video and I will watch again when I’m a bit more levelheaded… because I’m still a bit high in emotion atm

It is indeed rough when logic says one thing, but all your feelings are so strong about the negative interpretations. It is quite challenging when the negatives outweigh even spoken words of love. I’m so sorry, friend!

Hi friend! So sorry to hear that you are going through this. I have been rejected and abandoned many times by my friends and family and know how much it can suck out the feelings of self worth from you.

Firstly, it is okay to feel upset! Don’t be sorry about it. You can understand why the thing has happened AND be upset at the same time. Reasoning and emotion don’t always marry up because we are humans and that’s okay.

Secondly, did you try to talk to those people about how much it hurts you when situations like this occur? Not in a blaming way, obviously they did not have the control over their circumstances this particular time. But you can say that it is tough for you when plans get cancelled and provide some alternatives that, if they care about you, they can use next time to avoid causing you pain. For example: reschedule instead of cancelling, a follow-up phone call to check-in, or whatever that is that would make you not feel like you were rejected.

Another thing to try is what my therapist recommended to me: get some better friends. If you find yourself abandoned and rejected by the very people you expect to receive love and support from, maybe they don’t value you enough? And it’s not about you, it’s about them - because you don’t need to be anything special to deserve love, respect and attention. People who really care about you will make time for you, and if something comes up they will try to make sure to find a resolution that does not hurt you. You are worthy of respect. Your time and hopes are valuable. And you do matter!

Please don’t diminish your incredible worth because of someone else’s carelessness. It’s on them, not on you.

First I want to make it very clear that this situation was truly something neither of the participants could do anything about. It was just a set of circumstances that made it so that the meeting couldn’t go through. Not saying that this was how you interpreted it, but I just want that to be clear for anyone.

I have talked with them about it after I made the post. Mostly because I didn’t want them to find the post and think I was blaming them for anything, while I wasn’t. I was just struggling at that moment. We have rescheduled the meeting and have talked about similar situations and about how I was feeling, so I was really grateful that that was possible. It’s an old pain of rejection and it will take time and a lot of good experiences to change the narrative and the automatic responses.

I do have better friends and don’t talk to a lot of people anymore who have done this to me in the past. Mostly because depression made me not go out anymore and just isolate myself completely. Some of those friends I made thanks to Heartsupport, some of them because I got out of the cave and started talking about it again. And they ended up checking in on me consistently even after I hadn’t talked to them for years.
But even though that it’s maybe changing a little for the better, my brain still wonders every time if someone is going to pick up. Or if someone is going to show up. There’s still that huge part of me that doesn’t get why people like me or think that I’m valuable.
I have always been valued for making music or art… That was all I was good for. If I didn’t do that I wasn’t seen, so especially when I’m in depressive episodes, which I’ve been having a lot of lately, I don’t think I am valuable. So why would someone else? and why would someone else respect my time if I don’t think I’m worth theirs?