Its all too much

I’m feeling so overwhelmed. The past two years were full of Loss and Trauma and it just feels like it’s never gonna end. I’m grieving my friends who have died and wonder why god didn’t take me instead of them. I feel guilty for things I’ve done and have not done. And then there’s childhood trauma that I’m still having a hard time handling. I feel like what he’s done makes me worthless and it makes it so freaking hard to trust people. Because if that one person that was supposed to protect you would do something like that to you, why wouldn’t any other person you trust just hurt you? I start trusting people and then I’ll push them away and feel super guilty for it. I hate this. I feel lonely. But then again that’s my own fault cause I’m the one pushing people away from me that actually care until they won’t come back anymore. I hate how overwhelmed by all these feelings I am. I just want it to stop. I want this to get better but I don’t see how it ever could. Well thanks I guess for letting me vent. Ya’ll are amazing.

So, I have shared about this a little before, but I understand not being able ot trust on a high level. I was sexually assaulted twice, at the birthday of one of my close friends… I’ve only ever been abused by male friends I’ve had and my dad aswell. So, I spent so long refusing to trust or let any male near me… When I came to HS Dan and Casey both started talking to me, encouraging me to be open with them and trust them - they did NOTHING to hurt me, but I was holding them to the expectation I had held every other male to. That they were going to hurt me and abuse me, and that I couldn’t trust them… It took a while for me to realise that not every guy is the same, and that these guys really did want to help me and aren’t going to hurt me.
I tried to push them away so many times, I even told them to stop wasting energy on me and give it to someone worth it… and honestly, now I realise that, the people who leave when you start to doubt and put your walls up, aren’t worth your time. It’s the people that stick by and actually TRY to break down that wall.

I’ve never lost anyone close to me as such, but, my best friend attempted to take her life, and I know she’s been through SO much stuff… Everyday I wish I could have taken all that pain away from her, that I deserve it, not her… It haunts me everyday, but, with the help of this community, I’m getting to a much better way.

I had to tell myself that, people are going to think I will walk out on them when things get rough - the exact same way I felt towards you guys. But, knowing I’m not a person that would do that, started to slowly accept that I’m NOT the only person in the world that has a heart like that. It took a long time, but, now I know that those 2 guys and the others in this community aren’t going anywhere.

Hold Fast. If you want me to send you the drawing, please email me: [email protected] 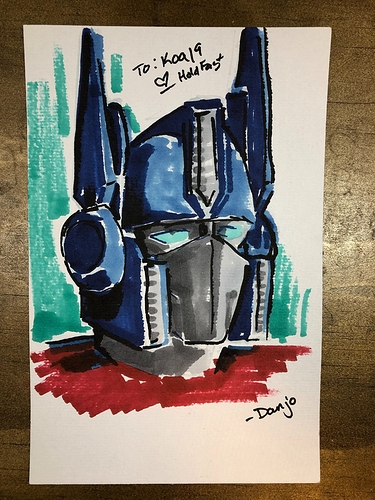 If you learn about your mistake of pushing others away, you’re fine. Everyone has done it. Including me. You are not a monster. I’m sorry you gone through horrible events. I won’t understand it. Even though I don’t know you well, I am going to give you love, respect, kindness, compassion, and care. Thank you for sharing. I hope you are getting better for yourself. God bless you.

Thank you so much for this picture and the video. It really is so encouraging and I’ve been watching it over and over again during the past 2 weeks. The past couple weeks have been really dark and the places my mind will go especially at night, terrifies me. But there is a tiny part of me that refuses to believe that this is all life can be and I’m trying to hold on to that with all the strength I have.