Before I start, I’ll try to keep this brief as to not waste much time, and if there’s someone else that needs help then they probably need it more. As some relevant information about me, I’m 16. So about a year ago I met someone online. I met them as part of a team for a competitive game. This person (I’ll call her K for convenience, she’s 16 as well) and I have gotten very close. We’re hesitant to call it a “relationship”, but we’d trust each other with our lives. My parents still don’t know about her yet. If that was all I’d be fine, but of course there’s more. About April of this year one of the members of the team (there were 5) was under investigation for being a child predator since they were/still are in a relationship (Don’t worry, they claimed to be 20 but are actually 16) with a friend of mine that I know from school who was the reason for me joining. This scared my mother, who has always been protective of me. This really limits how much I can talk to K, as much as I hate that. There’s more though. This part is the worst in my opinion. K’s dad is, from what I’ve seen and heard from K, is rather verbally abusive and on occasion will hold on to her arm or something and not let go, and K just freezes up in that situation. She’s really scared of him. K, as of right now, has a really negative self image. She often comes to me saying how terrible she is at everything. Not only that but she’s very against eating. Towards when we first met she was fine, but recently she’s avoided it whenever she could. (Apparently that’s happened before?) That’s gotten a little better, but she’ll usually skip a meal and not have anything to make up for it. (Just as a note she doesn’t like how she looks) There was even a point where she resorted to cutting when she couldn’t take any more. That’s, fortunately, stopped by this point. She constantly has these sort of thoughts on her mind.(Attached) 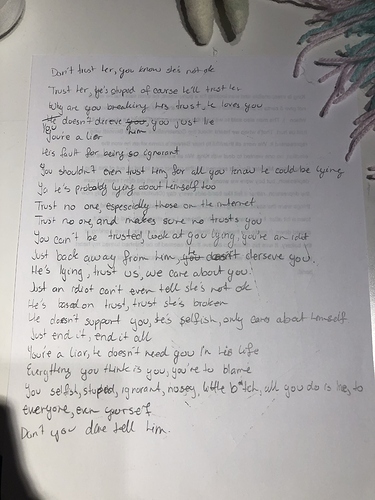 image0.jpg3024×4032 1010 KB
These are quite old, and they’ve gone away a bit by now. (Just as a note because I’m thinking about it, she’s only thought of suicide once, never took action on it, and hasn’t thought of it since) I can’t stand to see her in such pain and fear so often, but I can’t do anything. There have been a few attempts to get her to go see someone, but none of them ended up working. I don’t know where to go from this point. I can’t talk to anyone in person, and my messages aren’t enough to do anything. What’s worse is that she may be living there through college, and I fear what could happen. So please, if there’s anywhere I can go let me know. As much as I hate to admit it I’ve come very close to accepting that my attempts are meaningless. If anyone knows where to go or anything I could do to help her please let me know. I can’t just sit and watch this happen anymore.
Micro November 30, 2019, 6:24pm #2

You don’t waste the time of anyone here and what you’re experiencing always matter.

The reaction of your mother is quite normal and she wants you to be safe, but I’m also sorry it’s limitating you to talk with K. If she shared about her situation with her father, it’s a deep mark of trust. She’s obviously in pain and being scared of her own father is indeed alarming, not mentioning every other things you described. If there are suspicions of an abusive relationship, maybe there would be a way for her to try to reach out to a hotline. It doesn’t have to be necessarily verbally, as there’s a live chat available with profresionnals through this website: https://www.childhelp.org/hotline/

You are a caring person, and your messages means already a lot for her. But you don’t have to handle this alone. I’d like to encourage you to reach out to people you trust, whether it’s family, friends or any profesionnal who may know how to intervene in this kind of situation. Do you think it would be possible for you to talk about it to your mom? Or for example to a counselor at your school? May I also ask if her mother is living with her or may be aware about her struggles? I know you said you already tried to help her to see someone, and I’m really glad to know that. She needs external help. But I really want to emphasize the fact you’re already doing a lot, even if you may not see it this way.

I know it’s not solving everything, but there are also different resources available here on HS. Two workbooks, for example, one about depression and the other one about self-harm. She can receive them for free if needed. There are more informations about it here: https://heartsupport.com/resources/

If this community can also be helpful for her, in any way, we would be glad to give her some support, as much as we can. This is a safe place for everyone, including her.

Thank you so much for responding @Micro, I’ll be sure to look into the hotline and those resources you provided. To answer some of the questions you had, I fear going to anyone in person in case it gets to my mom, who I’ve convinced myself would take away any line of communication I have with K, and she’s told me on many occasions that me being there does a lot for her. Her mom does live with her, and is often the only one in the house she goes to for anything. She does have a younger sister, who she is on good terms with, but from what I’ve been told her sister also has to deal with some of what she does. Since I never mentioned this, she’s in Canada and I’m in the U.S. Thanks again for responding and I’ll post here once something happens again.

1 Like
I don't know how to help
Am I just being impatient?