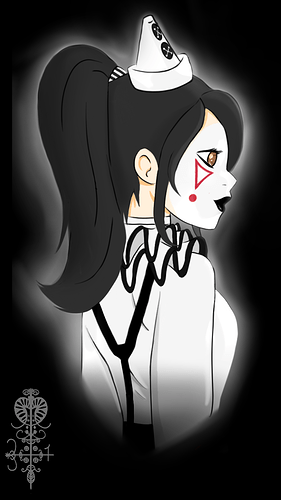 I’m not sure how to start…i’m a girl with big circus dreams, i’m a digital artist, a magician and musician with MPD and Monophobia, but my family doesn’t know about any of this. my mother left the family when i was 12 and my sisters think I’ll never accomplish anything, but my dad thinks the most of most.
my father always tells me, on a day to day scheduled, that i’m: useless, garbage, an idiot or stupid, mentally ill, insane or crazy, a disappointment, worthless and a waste of time, bad daughter; list goes on, but those are the main things he says.
i know what he says shouldn’t matter to me, i know that i shouldn’t care cause “non of it is true” as most people say. i know i shouldn’t, but for some reason my heart aches at his words no matter how much i try to ignore it. for these last 6 to 8 years i have grown to believe the words he say, i do believe im stupid and i do believe that i’m a waist of people’s time. to the point where i am not afraid to tell others that i a disappointment cause i think its’s true.
for years i have watched the people live out their normal lives doing the same old same things as if they repeat the same routine day in and day out. i can’t say that i’m not going through the same, but i don’t wish to be.
i dream of working in the circus, i love that traveling bigtop more than anything and anyone in the world, and once im well prepared i will move out to join it as a magician.
however, there are days where dad comes in and it all goes to shit… i don’t yell back or pick for a fight, i just stare and let him finish till he tells me to go clean or something. another thing he does is make me and my sister clean from the moment we wake up till 1 am sometimes, mostly on the weekends, cause’ he believes woman are meant to clean up and stay in the kitchen. he doesn’t clean up after himself cause’ he has girls to clean up after him and to cook him meals or do the lying to people for him to make himself look like the good guy around other people.
i don’t believe i have depression, just feeling under pressure or stressed out, and i dont need a damn therapist to talk to, because my dad put me in one awhile back and they tried to make me take stupid happy pills, side affects being that i’ll try to hurt or kill myself. how the heck will that help? am i suppose to be happy while i hang myself?
i cant remember the last time i had a day where i didn’t day i hated myself. i only live to make my circus dream come true, to someday open my own circus.

“No one ever made a difference being like everyone else.”
~ P.T. Barnum

Despite what your family may tell you you are not useless or worthless. You are a beautiful soul (and a great artists!) I know its hard not to listen to them because they are your family and words hurt like hell. Words still and penetrate deeper than physical wounds

I know it seems like it but no one’s life is “normal” but I know the feeling of not wanting to live out s ‘mundane’ life and a life that other people think you should. I love that you have a big dream, it takes guts to truly admit out loud what your heart beats for.

Despite what your dad may say or the toxic environment you are living in you are worth so much more!! And I truly believe there is something different/better out there in life for you.

I understand be cautious of therapists after your experience but it might be worth trying again. It can sometimes take a number of tried until you find the right fit for you. Try out ones that don’t have the authority to prescribe pills if you are against taking them (but also note that just because you are on medication for a while doesn’t mean you will be on them forever or that there is something wrong with you).