Time to Have Courage

I try to keep the Serenity Prayer at the top of my mind. “Grant me the Serenity to accept the things I cannot change, the Courage to change the things I can, and the Wisdom to know the difference.” I’ve realized, though, that I’ve been focused most of my life on looking for that Wisdom. When I’m confronted with adversity, I try to break it down into the things I can and can’t control. Once I do that, I call it good. That’s not enough though. Wisdom without action is… IDK, but not useful.

We bought a house 6 weeks ago. So far, homeownership has been a series of things “I didn’t want to do first thing.” I’ve spent time discerning that those circumstances were beyond my control. They were issues that came with the house, there’s nothing I could have done about that. I’ve thought about what needed to be done. Some stuff got some, some has been de-prioritized, but it’s all been weighing me down.

Today I realized that our backyard is overrun with poison ivy. I felt myself shut down inside. I talked about it with my wife, and we decided that we just have to remove it as carefully as possible. I can’t change the fact that the poison ivy exists. I can control how I respond to it. I know that difference. What was missing at first, what’s been missing from our adventures in homeownership, was the courage to change it. Once I realized that, I started feeling stronger. It’s not enough to know that we need to remove the poison ivy, we have to do it. We have to be brave.

We already removed a ton without realizing it because it’s dormant, and we have full-body rashes to show for it, but somehow that makes it better. We had no problems removing vines before we knew they were dangerous, what’s stopping us now? Now we can take precautions. Removing vines wasn’t courageous before, it was just an evening activity for a week. This is an opportunity. Yeah, a large part of me still wants to never go into our back yard again, but that’s not how this works.

“Grant me the courage to change the things I can.”

Hey, SheetMetalHead! That’s not fun about the poison ivy but that’s cool you are seeing it as your first task as a homeowner. Keep that prayer in your head. Keep that mantra. You are doing great as a homeowner knowing there are things you have to do and doing them as a team with your wife. By the way, my brother gets terrible poison ivy and he uses a body wash called Tecnu and it helps him a lot.

Hey Friend, Thank you so much for that post, I love the way you have used the serenity prayer throughout your everyday life, Its funny as I was talking to my Mum only recently about that very prayer and gave her a copy of it to keep to read to try and calm her down when she was getting stressed so I find your post really fascinating. I love the way you have told your story. I also want to congratulate you on your new home. I think you are awesome and a real joy and I am so glad you have fought back against that awful poison ivy. Keep it up you. Good luck in your new home. Love Lisa x

this was a beautiful reflection on how you’ve taken extra steps on living out every part of the serenity prayer. “I can control how I respond to it” is so simple yet so powerful and i appreciate you sharing this journal with all of us here on the wall. i hope you and your wife can continue tackling the poison ivy together, making this new house your new home in no time. once all of those vines are gone, you can step back and have a visual representation for the courage, bravery, and perseverance you put into this and will continue putting in for everything you do. you got this, my friend, and i’m so proud of you!

As someone who, not too long ago, went through the experience of being a first time homeowner of a house that had ALL kinds of surprises, I think I understand what you are going through. Even down yo the surprise poison ivy hiding in the back yard. Finding issues that you weren’t expecting, and they are now your headache to deal with, is something that is never fun to deal with. But they come up. And it wears down on you. Even though you didn’t know you were yanking poison ivy, now that you do know, it’s just that much more draining. There is no worry or shame in acknowledging that.

@eloquentpetrichor, I’ll remember the Tecnu. Thank you for the pro tip!

@Lisaw1973 Thank you for the congratulations, and for saying I’m awesome and a real joy

Above and beyond homeownership stuff, I’m trying to keep in mind that I am worthwhile and bring people joy, so your comment was really timely

@twixremix I feel honored that my simple reflections could impact you like that. I’m also humbled that you’re proud of me. As with Lisa’s comments, that’s something I’m trying to do a better job of accepting from others. At this point, I’m looking forward to stepping back and admiring our poison ivy-free yard, for all the reasons you mentioned! It makes me more motivated to get after it!

@Taladien, glad to hear from someone who’s just been through it. I “know” I don’t have the monopoly on hard first time homeownership, but it’s good to have peer confirmation that I’m not alone. We need to break our task list into categories, first by priority schedule, then into inside and outside tasks, so we can do the outside stuff while the weather is still nice. Just knowing that we’ll be breaking up our to-do list like that, and that the inside stuff can wait until it’s too hot to do big outside projects, is already a relief.

Update: tonight I’ll be stopping for herbicide after work, and at least starting to spray vines this evening. They say try to do it in the evening to minimize impact on pollenating bugs. I’ll be playing Metallica’s “Kill 'em All” album while I do it

Last night I mowed the lawn and picked up enough leaves to fill a 55 gallon bag. It was a good homeownership win, one I really needed. I feel really good about that work. I can do the homeowner things!

Thank you all again for your support. I really, really appreciate it.

I wanted to share an update. We were thrown to the front lines on this shortly after I posted. We had a bunch of poison ivy coming in from behind our fence, and the city told us we had a week to clear it out. We didn’t have the mental bandwidth to think about hiring someone to take care of it, so we covered ourselves from head to toe and tackled it head on.

It went so well! We cleared tons of it in a few hours, and by taking lots of precautions we didn’t get rashes! The mess behind the fence was WAY worse than what is in the back yard, so now the yard doesn’t seem nearly as intimidating. It felt GOOD to face our nemesis and overcome it. It was a huge homeowner win!

Pics or it didn’t happen. This took place over 2 weekends. 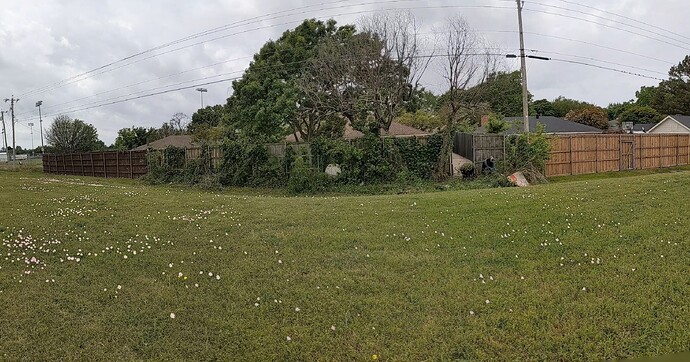 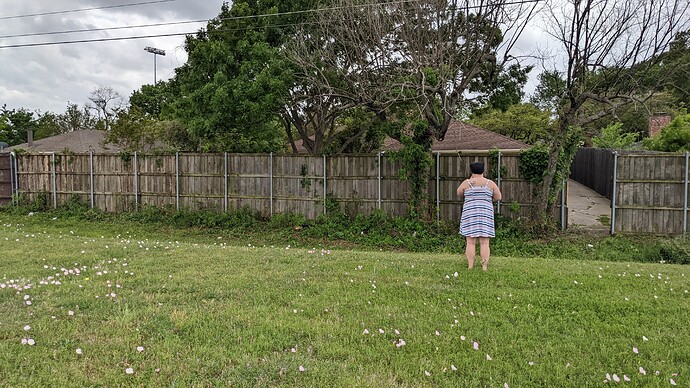 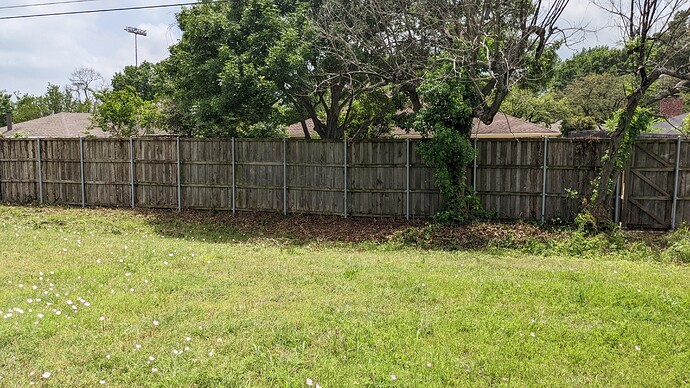 We also had 2 dead trees behind our fence that were covered in poison ivy and overall made the area less hospitable, and since they were in the power lines the city took them down for us 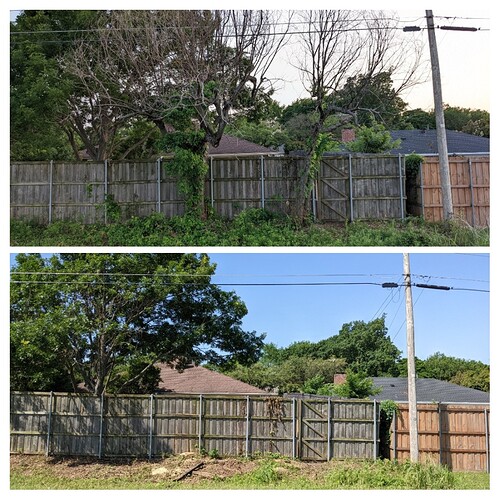 @SheetMetalHead You rock! Look at that clean fence! It must be such a huge relief to not have this intimidated task being overwhelmingly stuck in your mind anymore. <3