A few days ago marked 3 months of my rape. 3 months of me trying to heal, 3 months of me having to uproot everything in my life that I knew, and start over. 3 months of being paranoid I’ll see the guy who did this to me again. 3 months of life just not giving up. I recovered a bit since this happened to me. I spent 8 days in a psychiatric hospital because I didn’t want to live anymore because of it. Things are still hard. I am still struggling. I miss my old job, that I had to leave because I worked with him. I continued working there for a month after the assault, seeing him everyday… I finally have a new job, but My thoughts are still dark sometimes, and there are days when I want to give up. I can’t scare my family like that again. I can’t come so close to taking my own life again. I don’t want to. I want to get over this, I want to heal from this, and I want to get back to a normal life. ‘he’ doesn’t deserve to take up space in my head, and yet I allow him to everyday. Things trigger me almost daily. Movies, things people say, tv shows, everything reminds me of what happened to me. Of what he took from me. I haven’t heard from the detective in a long time. I feel like he forgot about me, even though I know he didn’t. There’s nothing to my case and nowhere for it to go. No evidence, just my word against his. It’s depressing to think about. I can’t believe this happened to me. Why do I have to deal with this. I keep wishing something would happen to me so I wouldn’t have to deal with this anymore. I often don’t want to wake up. Why has this happened to me. Why doe’s he get off scott free. I don’t deserve to suffer like this.

My heart aches at this. My assaulter got away with it too. Including the man who sexually abused me most of my childhood and teenage years. Nobody ever wanted to believe or accept it. Because outside of the things done to me, he was a “good” man. Even as a young girl he was my best friend. I was shunned off into silence and later separated from the family. It hurts when these things happen to us and we have to carry the pain and intrusion of it with us for the rest of our lives. We have to go through being told to get over it or let it go. Not everybody understands what these things do to you. And in the mean time, our abusers go on with their life normally, casually like nothing happened.

I love you friend. You have overcome something that you never should have to begin with. But you are taking the steps to take your life back. That makes you an incredibly strong and courageous person.

I hope that you continue to find that healing so that you an be at peace within yourself. Know how incredibly loved you are.

I’m not a licensed therapist but it sounds like your having some trauma problems. Have you thought about talking to a therapist that deals with abuse/victims?
I just want to let you know there is no excuse for what this person has done to you. The feeling of taking your life away from you. It takes courage to step up and let people know what you’ve been through. You are resilient and strong.

You’re right, you don’t deserve to suffer like this. I’m so sorry it happened to you. Sorry there are so many things that are triggering you these days. You know that my heart understands deeply. There’s not an ounce of pity in my words. Only an insane amount of love and respect for you.

I don’t know how it’s going to be in regards of the detective and justice. But what I do know is that you are not alone and you won’t be alone through this. Your words are heard. You are seen. There is nothing and no one that has the ability to take it away. Never.

There is a “before” and an “after”. And in between, a lot of uncertainties. But through all of this, something remains: the love we have for you. You are loved and cared for. So much. You will be able to make more space for this love in your mind, in your heart, in your soul. And less space for this person. You will heal. You are taking the right steps to take care of yourself already. But sometimes it’s very foggy, dark, disturbing. Sometimes it’s okay not to be okay, to acknowledge it and to say it.

You are strong. Even if maybe you don’t feel like it sometimes. It’s okay. The people who love you and care about you will always be here to remind it to you. To remind you that we believe in you. Also in your capacity to let your inner light shine again.

Last time I responded here I shared some art with you. I’d like to share some new one with you.
It’s from a friend of mine, who’s a deep inspiration to me. And also incredibely good with words and poetry, which I’ll share as well.

I hope this warms your heart today. As much as knowing you warms mine. 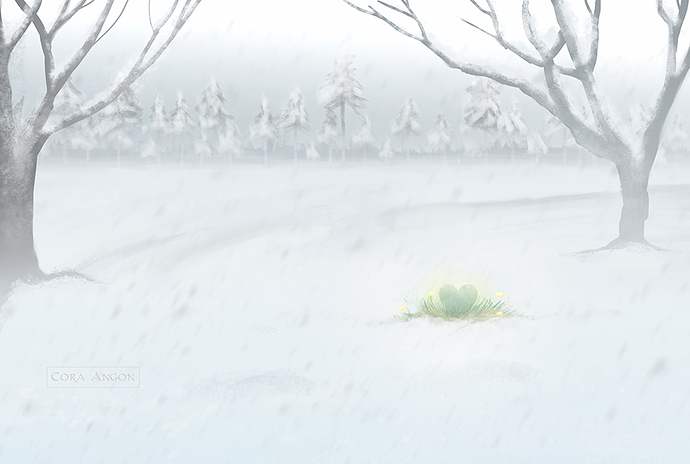 “Commences in the harshest winters.
When the snow seems never ending.
When the dark skies are constant.
A shade of green pushes through.
It survives and melts the coldness.
Starting some thing new.”

Rooting for you. Holding your hand.
Still and always.

Ambrosia, I fucking love you. You are an incredible, strong and beautiful woman. I’m grateful for you. I remember when I was assaulted, it took me more than 2 years to recover. I would walk on the other side of the street to avoid any male who was in the area. You don’t deserve this, no one does. It’s so horrible that to them its nothing, and to us it’s life changing. Stop beating yourself for thinking about him… It’s understandable. You’re taking a huge step in talking about it, and attending therapy to work through it. A lot of people wait years before doing that. You’re amazing, he won’t ever be able to take that away from you. You are doing so much better than you think you are right now, and its ok to not see that at the moment. You wouldn’t tell anyone in this situation that they’re stupid for not being able to “just get over this” and no one is going to tell you that either. We’ll be here for you, always. You know that. <3

i have no words friend, mostly just anger because i dont want you to be in this place and i feel its unfair to you. but, i do have time and a heart for you. I’ll be the eyes when you cant see, your heart when yours cannot beat and the love you need when you dont have it for yourself. i want you here. and yes this is a mountain… but getting to know you i can say that you are BIGGER then your probelmes and i see that you will destroy this and one day someone is going to come to you, and you will be able to say “i know what you are going through” and you will be able to take the thing that once hurt you and turn it into something that could save that person’s life. that is the warrior i think you are and the strenght i believe you have

First off, I love you. Thank you for sharing your story with us. I’ve talked about my story a bit in the past, and while I don’t think it’s necessarily my place here to share it again, I just want to mention some things that helped me and might be a source of reassurance for you as well.

It took me about half a year to realize that I was assaulted, and another several months after that to start to accept that it happened. My situation wasn’t a “clear cut” rape/assault, so I felt like I was making things up. I had constant thoughts of “maybe it didn’t really happen that way,” or “if I had just done/said…” But it doesn’t matter. I saw a person, not a therapist, who specialized in helping college students who had been assaulted. There was one thing she said that really stuck with me and helped me: regardless of what really happened, the hurt was still real. You see, it doesn’t matter HOW much it hurts, if it hurts, we should do something about it. This goes for any topic, really. While it seems your situation is a little more straightforward than mine (in some ways, don’t get me wrong I know it still seems like a disaster), the fact that you’re reaching out through the pain shows strength.

I also want to talk about the triggers. When I was going to therapy and discussing my assault, I had daily thoughts of my assaulter. Between classes, during class, doing my homework, laying in bed. It didn’t matter what I was doing, who I was with, or anything - I would have constant, random, intrusive thoughts about this person. And it was DRAINING. Especially when I knew I needed to be focused on schoolwork. I tried different coping mechanisms like carrying a rock with me (something to physically touch), or when I started dissociating after a panic attack of thinking about him, I’d count the things that were white around the room. Sometimes the techniques worked - other times they didn’t. Sometimes my partner was there with me, holding me while I cried for hours on end. Sometimes they weren’t, and I suffered alone. After figuring out some of my more-likely-to-work coping mechanisms and LOTS of time (like, two years) and lots of therapy, I no longer have those daily intrusive thoughts. I still have triggers, but I’m a little more prepared. I still have thoughts, but they aren’t as oppressive anymore. I can’t promise there’s a “cure” and that someday it’s gonna be sunshine and rainbows. The truth is, you’re probably going to have these struggles, at least to some extent, for the rest of your life. When I realized that, it was completely daunting. But with time and practice, you will regain more control over your thoughts and your life. I promise.

I’ve been there. It SUCKS. But you got this. HS has got your back through thick and thin - please don’t be afraid to reach out.

We love you so much.