Depression relapse getting harder to deal with (tw abuse, sh)

Hello everyone. I recently had a bad depression & self harm relapse. As a quick background, I’ve been dealing with what is most likely depression since 2016. We lost our insurance right after the brunt of my depression hit in 2017 which is sadly also when I was starting to see my GP to possibly get into therapy since I had dealt with a lot of traumatic experiences, and since then we haven’t had insurance so I haven’t been able to get professional counseling or diagnosis. I was legally a child up until this year, 2021, and so I was unable to make any strides toward treatment for myself in the past. In 2019, I had another bad depressive episode that lasted for half a year in which I pulled away from just about everybody out of fear of hurting others/getting hurt. It ended with me almost attempting suicide and my family becoming extremely worried.

I had pushed 3/4 of my closest friends away, but the same month I nearly committed, I realized this shouldn’t have to be the end and began to pull myself out of it all. It was really hard, and it took 2-3 months for me to fully get myself out of the depression, but I was committed to it and with the onset of the pandemic, I decided it was time to get myself together and be better, both for myself and my family and friends. My remission from depression lasted 10 months and was the happiest I had felt since before I developed it in 2016. I worked hard to further my recovery and accept help from others as well as help them, and it was the best feeling I had in years.

Unfortunately, over the 2020 holiday season, things got harder. I am a current high school student, about to graduate, and with the unbearably cold weather and the pandemic worsening with new strains, I was unable to see anyone outside of the family members at my house for a long time. It was isolating and the holidays are a rough time for my family, which made my home life much worse as my father became very irritated and angry with his life and began to take it out on me. This combined with someone who I had a toxic friendship with seeking me out just to harass me even though I hadn’t spoken to them in over a year, I began to fall apart again in late December.

I relapsed again in early January. I had been almost a year clean from my depressive episodes. I was so close. I told myself to pull it together and a week later forced myself to try and smile through it, and I made it through about 2 weeks of putting a smile on my face before I inevitably fell apart and isolated myself once again. I was and still am too afraid to talk to people about my problems since me doing that too much caused a lot of bad things to happen during my last major depressive episode, and I am ashamed of it. Unfortunately I’ve even taken that too far now. I tried to get up and I made it through my birthday after a week of laying in bed and crying, but the day after I shut down again.

I forced myself back up hoping I wouldn’t isolate again, but that was the final straw for my depression it seems. In early March I had a horrible breakdown and isolated, and I have now been isolating myself from everybody for about 2 months. I tried in late March to pull myself out but failed miserably and actually made myself worse. I don’t know how to get out of this dark hole at this point. I feel like such an asshole.

Things were finally so good for me, and I feel like I have once again ruined it all for myself. My friends and I were closer than ever and they tried to help, but I don’t know how to accept help at all anymore and was too afraid I’d put a burden on them or drive them away. Now I am afraid that i’ve done this anyways by isolating myself. I was finally months away from finally getting therapy, as I became an adult this year and will be having to get a job, and I intend to finally be able to pay for therapy that way. It feels like I’ve steamrolled everything and I hate myself for it. I hate myself for not being there for my friends right now, I hate myself for pushing them away, and I hate myself for being too much of a coward to even look at my phone. I can’t even touch the phone in fear of me checking it and possibly seeing that I’ve driven someone I love away, as I had done multiple times during my depressive episode in 2019. I had been doing so good in my recovery and it was so nice to be surrounded by people I love, even if this pandemic makes it so it can’t be physical. My friends give me hope and happiness and life, and to be away from them is eating away at me.

Being stuck at home due to remote school makes it worse as I am alone for a good chunk of each day until one of my family members comes home, which is even more isolating. It all hurts so bad and I feel so ashamed and embarrassed. I also cut again which I haven’t done since January of 2020. The guilt is suffocating. Relapsing from depression and self harm at the same time just makes it worse. I was so close to the light at the end of the tunnel and I feel like I have screwed it all up. I feel like all I had to do was hold on a little longer, but instead I let the depression eat me up again.

The fact that I have a strained relationship with my mom due to her having severe mental illness and an extremely abusive past with me doesn’t help either, as I now have the pressure all on me to either invite her to my graduation and risk extreme tension with my family (which they don’t need with all the stress they already have on them right now) or don’t and possibly break her heart as well as receive frequent guilt trips over the phone. I haven’t seen her in 3 years due to her having become abusive again after going off her meds without telling anyone, and so she currently resides in a rehab facility. I feel awful about it but there is nothing I can currently do for her. Mental illness runs rampant in my family and most of it goes untreated due to both inaccessibility and stubbornness, which is why the environment at my home gets really difficult sometimes. Add this all up and it makes a hell of a poisonous depression.

I’m getting so desperate and I really do want to get out of this relapse. I want to see the light at the end of the tunnel and be able to truly be there for and with my friends and family. It is so hard with this pandemic, and so embarrassing especially because just as it starts getting better in my country I of course had to relapse horribly. I know this is all a lot, and if you read this, thank you. I just want to do better and be better, and get away from this horrible illness. I wish the depression didn’t make it so suffocating. I need some advice or help or something.

Thank you for reading. I know this is all a lot but it really does mean a lot to me.

Hello. Nice to meet you. I hope you feel welcome. I’m sorry you are going through a bad season. I encourage you to listen to this song, and it will help you.

On Saturday May 1st, the HeartSupport team deployed to a Taco festival in Houston Texas.

We posted a shortened version of your topic to the Support Wall at the festival, and asked festival goers to respond to your post by writing on a tile. Each picture below is of 1 tile, and is from someone who cared enough to stop and speak encouragement to you.

We posted your topic toward the end of the festival, and got this reply. We hope that the words and support from this Houstonian helps encourage and support you. 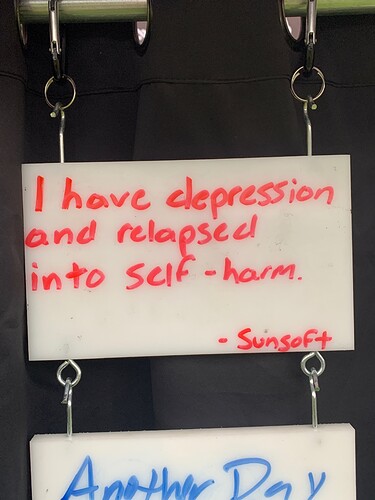 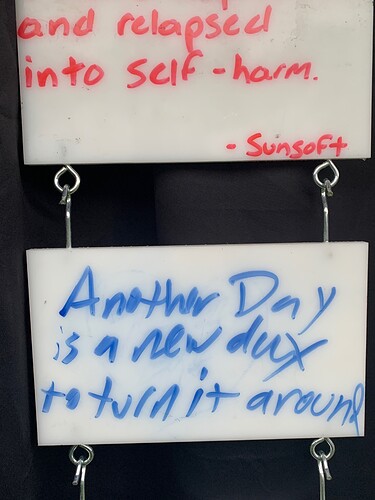