We're leaving my dad and he doesnt know

hello all, i just wanted to say thanks for all the support during my sh stuff, i threw out both of my blades for good and i havent had self harm urges since, ive been trying meditation and its been going well!

anyways, i want to talk about my family issues. my dads abusive towards my mom, and for a while i tried to ignore this and his history because i think it was easier for me to have one bad parent rather than two, but thats not the case. my dad has been abusive to my mom since before i was born, and during my newborn years, basically my entire life. he’s broken her nose, strangled her, shoved her into walls, etc. hes ended up in jail before because of the bruising shes had, its domestic violence.

hes not a good person at all, i want to make that very clear. hes never really been there for me when my mom was drunk, he would just sort of torment her in his own ways without offering support to me, i just sort of took what i could get. hes racist, and before i came out to him he would say the f slur, he hasnt said a word about womens rights since roe v wade, he isnt good. he used to beat up his family members, and they still have trauma from it.

my dad likes control, he likes people listening to him and he likes being the best in the room. i cant stand it, so me and my mom are moving! he doesnt know about this move however, and its gonna be complicated. he ignores all of the problems i have, my psychiatrist agrees that im likely autistic, but my dad ignores this. my psychiatrist thinks i might have a sleeping disorder, my dad “disagrees” he ignores my anxiety and depression even though im literally on medication for it. he wants this perfect child and he ignores that i am not that.

so thats why we’re moving, because hes terrible and I need accommodations at school that public school cannot offer me. my parents havent spoken in 6 weeks because my dad basically told my mom her childhood rape was consensual and said 'at least he didnt choose to __ with his family member" and its disgusting because she was a child and it was rape. thats one thing i cant forget ever, its absolutely vile to say something like that to someone.

its gonna be a difficult move, we’re gonna be camping during the drive up because we dont want to pay for hotel stays, we dont have a place to rent or buy so we’re gonna try to find a long term motel or a family friend who has a trailer for rent, but we’re gonna do it because we need to. my house is filthy and my dad doesnt care, my mom is disabled and im becoming physically ill because of genetics, my mom and i cant afford to keep up with house care, and he is more abled that both of us combined and he refuses to do anything. hes pathetic, basically.

my mom and i deserve a better life away from him, so thats what we’re doing, and honestly? i am so excited about it. really, its gonna be amazing. i cant go to a regular school, which he expects, i cant be a normal child, which he expects, he makes fun of every single one of my autistic traits, including my interests, hes just mean. so we’re gonna move, in 5 days, without him knowing. im a bit worried about the whole thing because i know its gonna upset him but i just have to remember hes a terrible person who wants me to have a terrible life just so hes happy. its gonna be a lot, but im prepared for it! me and my mom are just calling it an adventure, being optimistic about it all! ill update how it goes, but it should be good.

I remember the first time you posted on the Wall and you’ve grown SO MUCH since then. It must have been so hard to accept that your dad is abusive-everything you describe fall into that category. Your mom and you deserve to be respected, to be SAFE, to live a nurturing life and to heal from all the wrong that happened. I’m looking forward to hearing from you in the next updates you’ll share. If you need this post to be hidden at some point, please let me know too. We love you lot. <3

Megs_26 responded to your post today live on stream with some wonderful words of encouragement and support. She also made some paper cranes to encourage you!

Here is a video of her response and crafting the paper cranes for you to watch anytime you need some encouragement! 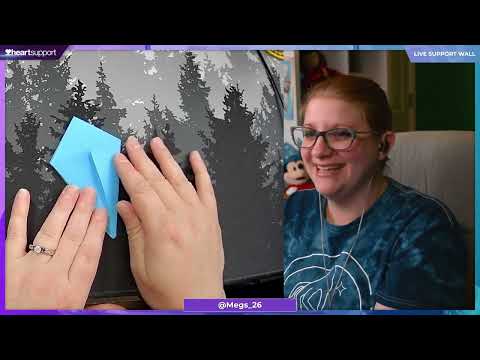 I am so incredibly proud of you & I am glad that you are going to have a new start with your mom. As someone who can relate to this…more than you know…this is wonderful. I am proud of you for staying so strong through this rough part of life. I am so proud of your mom for realizing what you need as her child & willing to do what it takes to make that happen. I am crying happy tears for you. I am so sorry for all of the pain you have had to go through, but I am thankful that you get to have a change,

Stay safe. Take care of yourself. Make sure your mom is taking care of herself as well. I cannot wait for an update. You are amazing. You are valid. You are strong. You are enough. You are important. You matter. 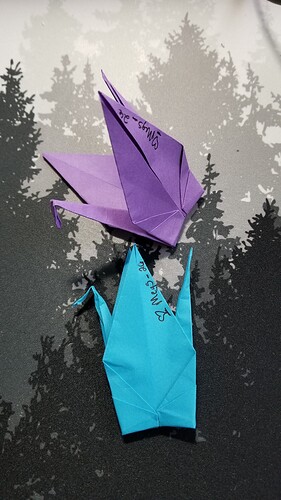 Here are the finished cranes.

it genuinely makes me happy to hear that you and your mother have found a chance to be free from the abuse. It’s something that really is something that you deserve and something that I hope will open up so much more opportunities for you and her. Your mother sounds like she’s come a long way in her own journey and has come out the other side. That’s something to celebrate too! You’re such a strong and brave person and I can’t wait to see what good things life brings to you.

Hi graciee, I’m so proud of you for doing the meditation (I’m assuming you’re doing the urge surfing meditation I suggested in your previous post about SH?), I smiled big when I read your post. I hope you continue to meditate and grow. It sounds like you and your mom have a good plan and I really hope things work out safely for you. It’s a very hard thing to pack up and leave like that, so it sounds like your mom is a very strong and brave person. I wish you all the luck in the world and please keep us updated. ~Mystrose

This post brought me so much happiness to read! I’m so proud of your mom for being able and willing to make this big decision so that you and her can be safer and happier! i’m so proud of you, and how you’re handling this.

I grinned when i read that she is calling it an “Adventure” - that is truly wonderful, and I do hope that this begins a chapter of your lvies of healing, peace and stability. I remember your earlier posts, and it fills me with great gratitude that you’ll be out of that situation, and I truly hope you can also get into a school that’s better suited to your needs.
Excellent post, thank you for sharing this with us. I hope everyone reads this, and every one is inspired to do as your mom did, and get help, and be able to step up and make the decision to get you somewhere safer, mentally and physically!! Keep up updated, if you want to, we’d love to be support you through this adventure

Hey Graciee, I love this post thank you so much for this. I love your positivity, I love how your Mum has found strength and the power to put both you and herself first and I love how you know that you are not responsible for any of what has taken place in your home. I love that you and your Mum and leaving and I want to celebrate the fact that after what will be a period of transition I truly believe your life is going to be the life you should have been having all along, happy, peaceful and one of a person that feels that they are loved and belong because you are and you do. I am so sorry you have had to go through any of this in your life but now the darkness is being lifted and I am so happy for you and your Mum. Much Love Lisa. x